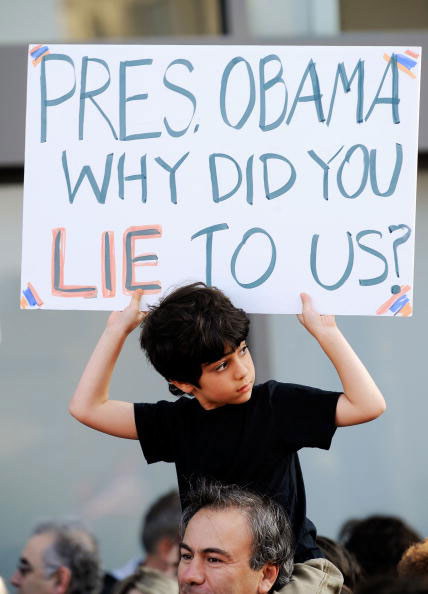 For those Americans who were still unsure whether Barack Obama really does lack authenticity, the President has finally come clean and confirmed that he does indeed have a tendency to lie.

Prior to Christmas, courtesy of Barbara Walters and the ABC News program 20/20, President Obama presented the nation with an important pre-2012 election gift. Answering questions from the probing “Proust Questionnaire,” the President admitted that in addition to how he views the rest of America, he too is “a little bit lazy,” and on occasion exhibits a predisposition to fudge the truth.

Hearkening back to the 2008 presidential campaign, it was Senator John McCain that first made an insightful statement about presidential hopeful Barack Obama.  At the time, the GOP candidate addressed Obama’s accusation that McCain had opposed regulation to avert the housing bubble crisis by pointing out: “I guess he believes if a lie is big enough and repeated often enough it will be believed.”

Obviously, McCain’s warning about Obama’s dishonesty did not deter the American public from putting the less-than-truthful Illinois senator in the White House.  John McCain lost the election, but before he did he asked a question that every American should still be asking: “Who is the real Barack Obama?”

Since then, the number of voices agreeing with John McCain’s original contention that his Democrat opponent suffered from an acute case of mythomania has grown.  Over the past three years, the short list of those who have concurred with Senator McCain include: Supreme Court Justice Samuel Alito; Joe Wilson (R-SC) of “You lie” fame; and Texas Democrat Congressman and Obama supporter Martin Frost, who accurately pointed out that in an effort to push a green agenda, Obama “at times…is not telling the truth.”

Even billionaire casino tycoon Steve Wynn joined the ‘Barack lies’ chorus and pointed out to Neil Cavuto of Fox News that “You guys on television use the term ‘disingenuous’ when the president … says something that isn’t true. That’s a fancy word for lying.”

Finally, confirming the suspicions of many and coming across during a 20/20 interview as the epitome of candor, at long last Barack ‘fessed up to Barbara Walters, saying that “Usually, the only time I lie is [in] very personal interactions with family members, who you say, ‘you look great,’ and they don’t. ‘Wonderful dress…’ Uh, not so much.”  The operative word here being “usually.”

After the President’s admission, even the first lady chimed in and confessed that she too lies, but only when “truth [is] not helpful.” Clearly, in the Obama household, as well as on the campaign trail, during fiery speeches, and in policy decisions, ‘hurtful’ and ‘helpful’ are key indicators as to whether what’s being said at any given moment is actually the truth.

Therefore, after also admitting that he’s really a “softie” and doing so on primetime television, it stands to reason that President Obama’s ongoing propensity to lie could just be a considerate attempt on his part to be helpful and not hurtful by extending “You look great” sentiments about an America he really perceives to be an “Uh, not so much” nation: lazy, lacking imagination and ambition and, much like him, “a little soft.”

Moreover, Obama family logic also indicates that the goal of the President’s admitted deceitfulness may be simply to avoid wounding Americans with hurtful truths and to assist the nation with helpful lies. Either that, or Barack Obama’s lying is an unconscious attempt to project his own character weaknesses onto honest, hardworking Americans in order to justify policies he knows we would patently reject.

With that in mind, it certainly wouldn’t hurt and might actually be helpful to know if Obama thinks it is ‘hurtful’ or ‘helpful’ to continue encouraging national division by falsely insisting that the rich don’t contribute their fair share.

How about the helpfulness/hurtfulness of swearing the health care reform bill wouldn’t raise the deficit?  And let’s not forget just how helpful it was for the President to promise the American public that the stimulus bill would prevent the unemployment rate from rising above a hurtful 8.5%.

Despite knowing how the public views being lied to by a president, it’s apparent Obama wants Americans to believe he seriously took into consideration how ‘hurtful’ or ‘helpful’ that $787 billion job stimulus package would be for our economic future.

Maybe he lied because the always helpful and never hurtful Barack Obama wanted the nation to accept as true that, thanks to that stimulus bill, there were jobs just ready and waiting to be handed out to hundreds of thousands of people in need of work, when in fact an economic grave was being readied, dug with the blade of shovel-ready false promises.

Whatever the reason, thanks to Barack’s honesty with Barbara Walters, Americans now know that every time the President speaks there’s a pretty good chance he’s lying.  Yet, it is comforting to also know he means well and that before he does prevaricate, he first weighs how ‘hurtful’ or ‘helpful’ it would be if he were to divulge his true agenda.

In the end, Obama’s 20/20 Christmas confession that he really is a lazy liar either validates people like Joe Wilson, who knew it all along, or is a devious attempt to appear candid and self-deprecating. Of all people, the President should know that lying to avoid being hurtful in a hollow attempt to be helpful accomplishes nothing. Nevertheless, just in time for the next election cycle the President’s dishonesty again brings to mind John McCain’s original still-unanswered question: “Who is the real Barack Obama?”