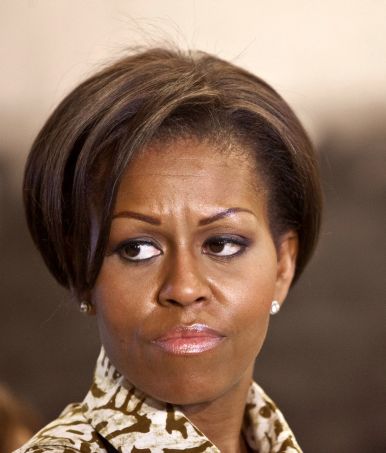 Michelle Obama is not one who can easily hide her feelings; usually her emotional state is visible on her face.  Think civil rights leader Dorothy Height’s funeral, or Michelle staring down French first lady Carla Bruni-Sarkozi.

So it wasn’t a shock to find out that some of the less-than-thrilled expressions Americans have witnessed over the last three years may be rooted in how Mrs. Obama thinks her husband and his team should be handling the affairs of the nation.

One has to admit, if Jodi Kantor’s New York Times article, “Michelle Obama and the Evolution of a First Lady” and forthcoming book “The Obamas” is an accurate portrayal, Michelle Obama going toe-to-middle-finger with Rahm Emanuel indicates she’s one tough cookie.

Kantor’s book points out that despite Mrs. Obama’s initial hesitation to involve herself in her husband’s administration, she has been an “unrecognized force …[and]… her story has been one first of struggle, then turnaround and greater fulfillment.”

The book says that Mrs. Obama was a “supportive but often anxious spouse, suspicious of conventional political thinking, a groundbreaking figure who has acutely felt the pressures and possibilities of being the first African-American in her position and a first lady who has worked to make her role more meaningful.”

According to Kantor, Mrs. Obama was often “caught in an internal debate about how the Obamas should look and live, travel and entertain.”

Her feelings for a country she only recently became proud of are evident in her ongoing disregard for the opinion of its people by blatantly indulging her affinity for opulent vacations, epicurean Xanadus, and closets full of couture.

The forthcoming book exposes Michelle projecting her own racism onto a colorblind America. Even after a white majority put her husband into the White House, Michelle felt that “As the first African-American first lady, [she] wanted everything to be flawless and sophisticated; [because] she felt ‘everyone was waiting for a black woman to make a mistake.’”

Supposedly fiercely defensive on her husband’s behalf and seeing him as a “transformational figure,” her allegedly hostile clashes with the likes of ex- Press Secretary Robert Gibbs and former Chief of Staff Rahm Emanuel indicate Michelle is someone other than who she projects herself to be while hula-hooping and gardening with Big Bird on Sesame Street.

According to longtime Obama strategist David Axelrod, behind the scenes, if Mrs. Obama “thinks things have been mishandled or when things are off the track she’ll raise it, because she’s hugely invested in [her husband] and has a sense of how hard he’s working, and wants to make sure everybody is doing their work properly.”

Discussing with aides the first lady’s displeasure about the direction the administration was taking on issues like healthcare reform, President Obama once confided that “She feels as if our rudder isn’t set right.”  Does “our rudder” include his rudder?

So apparently if everybody isn’t “doing” what Michelle thinks they should be doing, or someone criticizes what she is doing, the “rudder” adjuster believes “things have been mishandled [and] are off the track.

The book says that Robert Gibbs tried to protect the White House from being seen for what it is: “oblivious to public anger about joblessness, banker bailouts and bonuses.”  Apparently, Gibbs had the wherewithal to try to tamp down the “vacations, décor, entertainment [and] even matters as small as whether to announce the hiring of a new florist.”

According to Kantor’s account, Michelle was as thrilled with being told what to do by her husband’s team as she was being prohibited from walking her dog, or “monitored by her husband’s aides for everything from how she decorated the family’s private quarters to whether she took makeup artists on overseas trips.

So to show advisors who was in charge, Mrs. Obama flew the dog she couldn’t walk to vacation spots all around the world, called in a high-end Hollywood decorator to gussy up the living quarters, and hired a makeup artist that charges $15K per day.

Kantor’s book maintains that Mrs. Obama has no problem expressing her opinion behind the scenes about issues such as: how health care reform should’ve played out, the direction the 2012 reelection effort should take, and who should call the shots.

However, the book does say that publicly, the first lady has been reluctant to step into the limelight, except on signature issues like “Let’s Move” and assisting military families.  That was until recently when, in between vacation junkets, dutiful wife Michelle has taken to appearing on behalf of her husband in an attempt to exploit her popularity to “buoy [Obama] personally and politically.”

And while politics and policy intricacies are telling, more telling by far was the way Mrs. Obama handled the President’s 50th birthday, which said a lot about her domineering nature and how convinced she is that we, as well as he, need her to show us, and him, how it should be done.

According to Kantor’s book, in preparation for the coming election, Michelle exercised a practice run on birthday party guests, warning them not to leave early – under penalty – of what?  Then, she commenced with delivering a “stem-winder of a toast in praise of her husband,” who sat there like a schlemiel.

Minus the soaring orchestration and slide show, Mrs. Obama subjected those supposedly already her husband’s friends to her deluded version of Barack Obama: the “tireless, upright leader who rose above Washington games, killed the world’s most wanted terrorist and still managed to coach his daughter Sasha’s basketball team.”

A more apt description would have been: a president who, between vacations, ‘tirelessly’ works from 9:30 am – 6:30 pm and has played more golf standing ‘upright’ than any other president in American history; a president who “rose above Washington games” so well that, against Congress’ wishes during a “recess” that was still in session, he appointed a five-time Jeopardy champion to the position of director of the U.S. Consumer Financial Protection Bureau.

The man who shamelessly takes credit for killing Osama bin Laden – an end that would never have been achieved without GW Bush’s committed determination, and a father who, when not out golfing, will use any excuse, including spending time with the kids, to pop a few shots through a basketball hoop.

However, besides the ‘everyone was waiting for a black woman to make a mistake’ -portion of Jodi Kantor’s “critic and advocate” book, the most revealing moment of all was what allegedly happened during that laudatory 50th birthday party soliloquy.

Kantor recounts that in front of 150 guests, Michelle admitted to being hard on an embarrassed Obama, who attempted to cut her off only to be firmly told “to sit and listen,” which he submissively did, summing up in three words Mrs. Obama’s ever-evolving attitude toward the President of the United States and all of us as well.