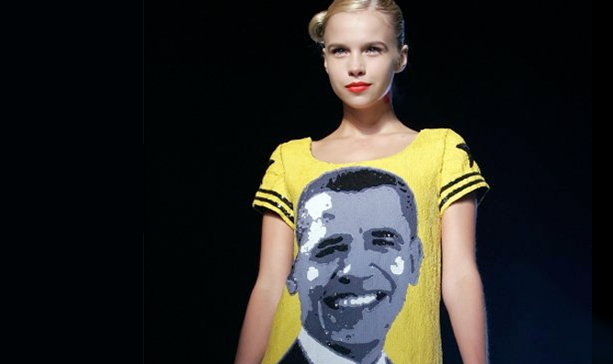 Just like four years ago, another group of legendary Obama 1 percent supporters have stepped forward to lend a creative hand to help the President raise money for his 2012 bid for reelection. Last time around it was “Runway to Change.” This time the design-for-Obama group effort has been dubbed “Runway to Win.”

Anna Wintour, the Vogue editor that hosted Obama’s supporters in her New York townhouse and who recently co-hosted a $35,000 per person fundraiser at Hollywood movie mogul Harvey Weinstein’s home, is heading up the venture. In the past, Wintour’s tony political functions were attended by the likes of Alicia Keys and $70,000 dinner power couple Coldplay singer Chris Martin and his actress wife, the “suddenly everywhere” Miramax “muse,” Gwyneth Paltrow.

So with Wintour now raising reelection funds, you can just forget the $5 raffle tickets for a hot dog dinner with Barry and Shelley. Instead, the campaign will be hawking designer duds to people who, last time around, were in such dire straits they hoped the new president would fill their gas tank and pay their mortgage.

For her latest effort, Anna Wintour has recruited Hollywood notables, designers, pop and hip-hop artists, and other all-around really rich people to raise money for Barack 2012 by designing overpriced T-shirts, tank tops, scarves, wristlets, and bags to sell at inflated prices to people who, in the midst of an Obama recession, really can’t afford them.

Thus, “Runway to Win” is yet another example that Barack Obama and his helpful circle of elite Hollywood friends and Seventh Avenue designer devotees are all pretty much insulated from reality, out of touch, and oblivious to the plight of the common man.

Recently, in order to make a point that a $40 tax cut is needed in order to feed starving American families, Obama asked the question: “What does $40 Mean to You?” Most Americans were probably thinking warehouse club paper towels and lunch for two at Taco Bell, not $45 T-shirts.

Unlike them, Obama was thinking T-shirts!  Apparently, the budget-minded President is comfortable with Mrs. Jay-Z, barely off the delivery table and out of the special maternity suite with the 10-man security team at Lenox Hill Hospital, designing cotton tee jerseys for impoverished Americans.

Beyonce’s creation stands to pull down a hefty profit for merchandise that’s actually worth no more than $5. For 45 bucks, clotheshorses all along the “Flaws and All” campaign trail, instead of buying groceries, will have a chance to wear a cheap quality “Yes we can… Greater Together” T-shirt.

New mom Beyonce is only one of many slobbering Obama supporters who will be joining forces to produce a trendsetting Barack Obama clothing line for 2012.

Thanks to all the participants, Obama for America supporters will have an opportunity to parade around with an Obama-logo tote bag while wearing clothing that shouts to the world that just because a person’s been unemployed for more than three years doesn’t mean they don’t want to contribute to four more years of watching Michelle Obama wear $2,000 sundresses.

For most Americans, splurging means shopping at Target. In the meantime, while the 99% eat Spaghetti-Os for dinner, the “Runway to Win” list of designers reads like a Who’s Who of attendees at White House Wednesday-night Kobe-beef Conga/cocktail parties.  The list is a couture catalog of who dresses Mrs. Obama in outfits whose one-year cost, when totaled, tallies to an amount that could save 1.2 million American homes from being foreclosed.

Some of the 22 designers participating in the effort are: Russell Simmons, billionaire business magnate of Def Jam fame; Sean “Diddy” Combs, another billionaire, rapper, and record producer who’s also recognizable by the names Sean John Combs, Puff Daddy, and P. Diddy; and even Tory Burch, the designer of the $500 boots Michelle wore to turn over the White House lawn when instructing Americans on the money-saving benefits of planting an at-home organic vegetable garden.

For those wanting a “first access pass,” on the tongue-in-cheek “Proudly made in America” campaign blog is the following announcement:

We’re launching something new, and a little different, over the next few weeks: Runway to Win, a collaboration by some of the country’s top fashion designers in support of Obama 2012. In the coming weeks, we’ll be rolling out Obama-inspired designs by everyone from Tracy Reese to Jason Wu to Tory Burch at runwaytowin.com. The details are still under wraps, but sign up for your First Access pass to get updates—and a first look at the new designs. Then invite your friends and family to do the same.

The truth is, any designer invested in Obama winning another term is probably secretly hoping their names will continue to be printed on the tags of what fills Mrs. Obama’s sartorially-stuffed clothes closet.

On the other hand, previous Obama supporters like Donna Karan, who participated in 2008, decided this year their idea of change would be to put Republican customers and capitalism first. Apparently, some decided to bow out because maintaining a customer base means more to them than being introduced by Scarlett Johansson at an Obama 2012 fashion show/fund raiser.

So, while Americans continue to suffer, big-name fashion designers and a diverse group of entrepreneurs like ‘Let’s Move’-Beyonce will be directly involved in “Runway to Win.” And yet, aside from the all the glitter and glamour, in light of 2008’s “Runway to Change,” the whole thing is really a bit scary. Why? Because if “change” is any indication of what four years of “winning” will be like, instead of walking the runway, if Mr. Fashionista manages to win a second term, America will more likely be walking the plank.