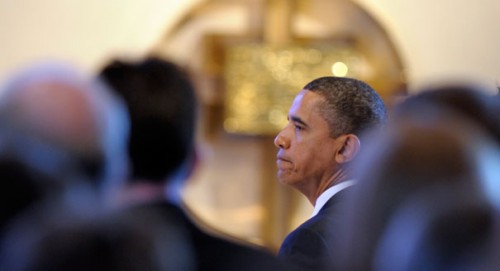 Just like a benevolent government that has worked hard to help provide naïve young girls with parent-free abortions, it stands to reason that ‘patriarchal’ Christianity would be next in line to be undermined. President Obama might as well put his arm around the parentally- and religiously oppressed, lean in and whisper, “That’s not fair. You shouldn’t have to listen to them.”

When it comes to challenging authority, the President seems to be particularly obsessed with using birth control and abortion as a weapon.  For some reason, while his wife is out dancing with platypuses straight-laced Barry seems excessively concerned about ensuring that everyone, regardless of age, credo or upbringing, can obtain free condoms, morning-after pills, sterilization, and abortion-on-demand.

And fear not kiddies, President Obama is not letting anyone or anything stand in his way.  Parents, religious tenets, moral conscience, and God Himself be damned, because when it comes to outfitting Americans for carefree sex or dealing with the inconvenient consequences, if government-issued solutions should fail, Barack Obama is there to say “Yes we can” to anyone who dares to say ‘No you can’t.’

The only religious group Obama respects and is careful not offend, whether religiously or parentally, is Muslims. The Muslim faith has drawn a line in the sand and the President, who feels very comfortable defying every other authority from the Vatican to the parents of 14-year-old girls, prostrates himself before Islam, funnels $800 million in aid to fund Arab uprisings and acquiesces, without question, to the tenets of the Koran.

Barack Obama knows full well that “Muslims believe that health insurance is ‘haraam,’ or forbidden, because they liken the ambiguity and probability of insurance to gambling.”  Thus, without question the Obama administration has decided that, unlike other faiths, “This belief excludes them from any of the requirements, mandates, or penalties set forth in [Obamacare].”   Obama respects the Muslim stance on gambling, and presto! Muslims are exempt from health insurance, and more specifically the birth control, sterilization, and abortion mandates that accompany it.

Yet the Catholic stance on birth control, and more specifically, abortion, is also quite clear:

Every human being, even a child in the mother’s womb has a right to life directly from God and not from the parents or from any society or authority.  Hence there is no man, no human authority, no science, no medical, eugenic, social, economic or moral ‘indication’ that can offer or produce a valid juridical title to a direct deliberate disposal of an innocent human life… Pius XII, Allocution to Large Families, November 26, 1951. (3)

Barack Obama, who’s obsessed with everyone else’s sex life and rate of reproduction, seems totally unconcerned that Muslims are growing as a demographic at an astounding rate, both here and around the world. The question arises as to why a President so focused on controlling so many Americans’ reproductive habits and overriding religion to ensure a woman’s ‘health’ is excusing paternalistic/prolific Muslims from this effort. Against the wishes of the Christian community, Health and Human Services Secretary Kathleen Sebelius and Barack Obama have joined forces, blocked the exits, and are distributing free condoms at the contraceptive circus. Meanwhile, Islam is exempt.

The President is urging and actively assisting in lowering birth rates in a Christian community whose tenets reject contraception and abortion and stands by while, according to Pew Research Center’s Forum on Religion & Public Life population projections, “Globally, the Muslim population is forecast to grow at about twice the rate of the non-Muslim population over the next two decades.” Thus, phony compromises aside, Islam receives a measure of respect for their dogma from Barack Obama that, in essence, he adamantly refuses to extend toward Christians.

The only excuse could be that the President considers gambling in the form of buying health insurance more offensive than murder. Either that, or this whole thing may have nothing to do with reproductive rights at all. Foisting contraception and abortion on everyone but Muslims would, in the long term, assist Barack Obama in extending ‘fairness’ by forcibly altering the Judeo-Christian complexion of America and ensuring that we truly are “no longer a Christian nation.”