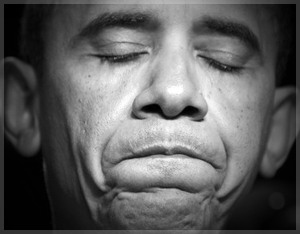 Barack Obama has turned his attention toward soothing the offended sensibilities of inconsolable Muslims.  In his role of Apologizer-in-Chief, the President requested forgiveness for military personnel who inadvertently burned some library Qurans at Bagram Air Base in Afghanistan.

Rather than send a firm message of his own, a conciliatory Barack Obama, champion of all things Muslim, reacted quickly to the growing violence over the Quran offense by promptly responding with heartfelt contrition. Taking a break from fundraising, he penned a three-page letter to an ungrateful Afghan President Hamid Karzai on “bilateral relations that included ‘an expression of his regret and apologies for the inappropriate and inadvertent mishandling of religious materials.'”

How did the Qurans end up being burned? Allegedly, detainees were writing secret messages in the books; viewed as a security matter, troops confiscated the books from the detainee library at the high-security Parwan Detention Facility, promptly discarded and then mistakenly burned them in an incinerator together with a pile of trash.

Most would agree it’s nearly impossible to maintain security in a place where small children are recruited to be suicide bombers and a religion’s sacred text becomes a delivery system for covert communiqués.

Apparently some Afghan laborers emptying the garbage discovered the charred copies, and since then the Middle East has been awash in carnage, and once again the contrition of an American president falls short. The Pentagon, NATO, and the U.S. military have also apologized, all to no avail. They shouldn’t be surprised.

It was an accident, but in certain circles the apology/forgiveness concept carries no weight. Requests for absolution have been met with two American officers being shot dead in Kabul, a growing number of civilians being killed, a British WWII graveyard in Libya being desecrated, mobs charging U.S. bases in Afghanistan, and a call by Iran for the White House – residence of the apologist – to burn.

Meanwhile, in Iran, an impenitent Christian pastor sits condemned to death for the sin of questioning the “Muslim monopoly on the religious instruction of children in Iran.” Youcef Nadarkhani, arrested in 2009, still refuses to denounce Jesus Christ, repent, and embrace Islam, and so his death by hanging appears eminent.  The original charge of “protesting” was later changed to “‘apostasy’ – abandoning Islam – and ‘evangelizing Muslims,’ all of which carry the death sentence.”

Some believe Iran is looking to execute Youcef to send a defiant message to America over sanctions against Iran’s nuclear program and to embarrass a President who quietly endures ongoing threats to kill American soldiers and citizens, Christians, Jews, and innocent Muslim civilians.

Christian Church officials say that there “may be as many as 100,000 devoted Christians in [Iran] and that Iran’s leadership is concerned about the spread of Christianity.” Before apologizing again for accidental book burnings, Barack Obama should take note of the fact that in Afghanistan there is no forgiveness for religious insult, which is similar to Iran, where there is no pardon for religious autonomy.

One would think that after being spurned by protestors, whose reaction to a plea for pardon is to “kill foreigners,” the President would decide to try defending something worthwhile, recognizing that those planning to execute Pastor Nadarkhani are of the same ilk as those storming U.S. bases over the inadvertent burning of the Qurans/secret-message carriers. Yet, despite the White House’s most recent condemnation of Nadarkhani’s plight, President Obama still insists on turning the lion’s share of attention toward placating those who will never be placated.

Compared to Quran rioters in Afghanistan attempting to burn down a UN building, Iran is more sophisticated when disposing of Christians. If Barack Obama is truly as concerned as he says he is about protecting the religious sensibilities of the worldwide faithful, it should be noted that Youcef Nadarkhani, deemed an ‘apostate,’ is as committed a Christian as the Muslims who are rebelling over the burning of Islamic holy books. When the court ordered Nadarkhani to “recant his faith in Jesus Christ” and “return to the religion of [his] ancestors – Islam,” Nadarkhani replied “I cannot.”

There’s no question President Obama cares deeply that some Qurans were mistakenly incinerated, but what he should really care even more deeply about is the fact that if Youcef Nadarkhani should hang, he will be the first Christian in two decades to be officially executed in Iran, which is both a chilling message and a monumental milestone.

Barack Obama should take heed; after his open profession of conversion to Jesus Christ, if he were in Iran standing in Nadarkhani’s shoes, he too would be facing the same fate for rejecting the faith of his Muslim ancestors.

Although believed by many to be intelligent, Obama still hasn’t figured out that issuing useless apologies is like giving “dogs what is sacred.” The Bible says if “you do, they may trample them under their feet, and then turn and tear you to pieces” – which is exactly what they’re trying to do.

As gunmen dressed in Afghan army uniforms opened fire and killed two US advisors in the Afghan ministry, Nadarkhani, seeking only to extend the gift of eternal life, contemplated being made an example of by religious zealots.  And as demonstrators raged on and the Taliban continued to encourage Afghans to not rely on “mere protests and empty slogans” but rather to “kill foreign troops,” an Iranian Christian prayerfully contemplated the number of steps from his jail cell to the gallows.

Barack Obama’s mea culpa has done nothing to stop angry Afghans shouting anti-US slogans from storming an American military base. Wouldn’t it be better for Obama, instead of offering heartfelt apologies that will never be accepted, to try to aggressively negotiate the release of Pastor Nadarkhani, who has peacefully accepted the unjust probability of impending martyrdom?

While the Quran protests rage on in Afghanistan, the soon-to-be-nuclear Iran vows to wipe both Youcef Nadarkhani and the nation of Israel off the map.  Yet President Obama continues to underestimate (or disregard) the plight of the Jewish nation targeted for genocide and a Christian pastor slated for execution.

Instead of sending a firm reprimand on behalf of the world’s Christians, Jews, and other potential martyrs to Muslim extremists wherever they are, President Barack Obama liberally expresses heartfelt regrets to zealots much like those he claims to condemn in Iran – extremists who, in the name of religion, eagerly mete out bloody retribution. Instead of seeking forgiveness from those who will never forgive, Barack Obama should focus more seriously on the fate of a genuinely virtuous man sentenced to die for the sin of preaching Christian forgiveness.