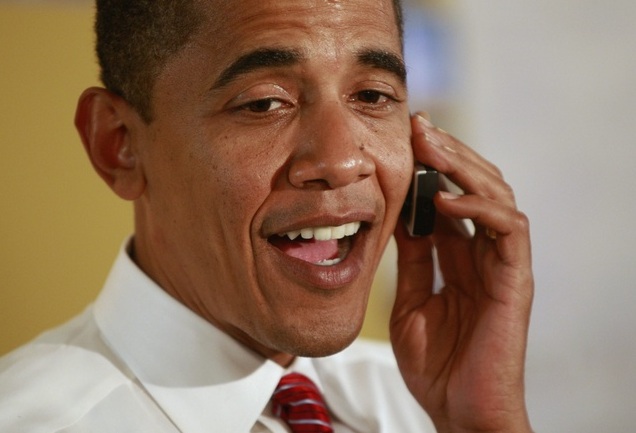 The truth is finally out – when not apologizing to radical Muslims, Barack Obama spends some of his down time making telephone calls to sexually promiscuous females.

Sandra Fluke, a third-year law student at Jesuit Georgetown University and past president of Georgetown Law Students for Reproductive Justice, due to time constraints was initially denied the opportunity to address Congress regarding her concerns about religious institutions denying women free contraceptives.

Ms. Fluke’s voice was finally heard.  Appearing before a Democratic Steering and Policy Committee event, Fluke expounded on the benefits of forcing Catholic institutions, under duress, to provide coverage to sexually active students who would rather not shell out a summer’s salary to accommodate their reproductive rights.

Sexually active spokesperson Sandra F. is apparently so committed to having her extracurricular activities subsidized by the American taxpayer that she admitted to spending $3,000 on birth control in three years.   After such a bold admission, how could Barack Obama not make it his personal mission to compel this patriotic nation to assist him in his efforts to provide Ms. Fluke with the proper accoutrements for worry-free coitus all year long?

Fluke’s testimony was so revealing that it even inspired conservative radio talk show host Rush Limbaugh to assign Sandra a colorful description with a word so shocking it prompted the President of the United States to drop his golf club and phone up the target of Limbaugh’s attack.

It should warm the cockles of America’s heart to know our President is so concerned about America’s sex life that he took time out of his busy schedule to reach out, touch, “encourage…support and thank” the extraordinary Ms. Fluke for enduring the attack of a puritanical conservative for merely “speaking out about the concerns of American women.”

Time and again, Barack Obama has proven he’s concerned about providing for the educational needs of America’s students.  It could be that in addition to re-habbing Sandra’s Rush-tainted reputation, the President may have called to reassure the outspoken reproductive activist that his administration is doubling down on its efforts to make sure Catholic institutions across America make free contraceptives available so that hardworking students can still afford a Starbucks Grande Caramel Macchiato to keep alert during late-night cram sessions.

After the call, Fluke said that Obama “did express his concern for me and wanted to make sure that I was ok. I am. I’m ok.”

Come on people, you gotta hand it to her – any girl who can participate in $3,000 worth of recreational sex in three years and still graduate law school has earned a personal phone call from the leader of the free world inquiring as to whether or not she’s “okay.”

Liberals from MSNBC’s Andrea Mitchell to Barack Obama have lauded the law student’s articulate ability to advocate for government-funded contraception while blowing off the First Amendment with forthright insistence that Catholic doctrine, teaching, and conscience be publicly crushed under the bureaucratic boot heel of Birth-Control Barack, Provider of Prophylactics.

Discussing the historic call from President Obama, Sandra said that “what was really personal…was that [Obama] said to tell my parents that they should be proud. And that meant a lot because Rush Limbaugh questioned whether or not my family would be proud of me. So I just appreciated that very much.”

During their telephone tête-à-tête, Obama attempted to alleviate the wounded feelings of both Sandra and Sandra’s mom and dad, who Rush Limbaugh dared to suggest should be humiliated by their daughter’s public discussion of her busy sex life, and for taking up the fight that the Catholic church should assist in making sure she’s not “punished with a baby” if she should happen to make a “mistake.

Instead of mentioning Sandra’s apparent appetite for habitual fornication, Obama reassured Ms. Fluke that despite Rush Limbaugh’s rude and crude insinuations, any parent would be proud of a daughter having the boldness to confront stodgy papists by boasting before a Congressional panel about the high cost of unbridled debauchery.

In a press briefing following the phone call, immediately after clarifying that Fluke is properly pronounced “Fluck,” White House press secretary Jay Carney said the President “[e]xpressed his disappointment that she has been the subject of inappropriate personal attacks and thanked her for exercising her rights as a citizen to speak out on an issue of public policy… with a great deal of poise.” What Carney conveniently left out is that the public policy in question denies the right of others to exercise freedom of religion.

When testifying, Sandra did Barry proud by rattling off a litany of typical liberal sob stories. Laid at the feet of religious institutions refusing to provide birth control was responsibility for a married student who had to “stop using contraception because she couldn’t afford it any longer” and the distressing plight of “women employed in low wage jobs without contraceptive coverage,” women who can’t afford 75 cents for a condom or $1.50 per day for birth control pills.  What’s a girl to do?

Piling on the guilt, Sandra’s testimony also included references to endometriosis and unreported rape, along with an anecdote about a lesbian friend with polycystic ovarian syndrome whose treatment required birth control pills; without which her friend developed a massive cyst the size of a “tennis ball,” leading to a partial hysterectomy with resulting menopausal symptoms and infertility – implying that all those conditions resulted, in one way or another, thanks to Jesuit priests who refuse to distribute free birth control.

One thing was clear, Fluke the feisty feminist’s testimony didn’t disappoint.  Continuing one, she declared, “As one student put it, ‘this policy communicates to female students that our school doesn’t understand our needs.’ These are not feelings that male fellow students experience. And they’re not burdens that male students must shoulder.”

That’s for damned sure – the male students at Georgetown apparently aren’t burdened in the least, and thanks to the efforts of one Sandra Fluke, are probably all quite relaxed.

If Georgetown University should insist upon applying the Jesuit cura personalis creed Sandra Fluke cited, then with the exception of complimentary birth control and abortion, it appears that her telephone buddy Barack is ready to regulate the Church into submission, and through government mandates assure that her recreational sex needs be given priority over the infallible teachings of the church.

In the end, Rush apologized.  However, Rush Limbaugh’s initial remarks about Sandra Fluke along with the President’s personal phone call may have accidentally furthered world peace.  After all was said and done and thanks to the testimony of Sandra Fluke, at least now Israeli Prime Minister Bebe Netanyahu knows exactly what it takes to get Barack Obama to talk to him again on the phone.