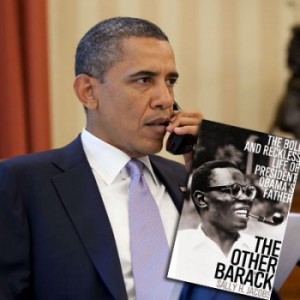 According to American journalist Sally H. Jacobs, President Barack Obama shares the same dysfunctional heritage as William Jefferson Clinton, whose father, like Obama’s, drank heavily, had multiple marriages, abused Clinton’s mother, and then lost his life in a car crash.

In her book, The Other Barack: The Bold and Reckless Life of President Obama’s Father, Jacobs claims Barack Obama Sr. was an “ardent Black nationalist,” bigamist, an alcoholic who used and abused women, and very much like the third of his eight children, thought more highly of himself than he probably should have.

Barack Obama Jr. has been known to enjoy a martini now and then, and like his biological father has an affinity for tobacco, silk ties, and fine tailored suits, but in fairness, the President doesn’t abuse alcohol or mistreat his one wife, Michelle.

Deemed in his epitaph a “brilliant economist,” at one point Obama’s father chose not to take a government position because the “pay was too poor.” Barack Jr., on the other hand, did take a government job and has since demonstrated economics are not his forte.

However, genetics are funny. Oftentimes a child exhibits similar character traits that are passed along hereditarily, and this is clearly evidenced in cases where that parent has been completely absent from the child’s life. If Sally Jacobs’ book is accurate, President Obama shares more than a few personality traits with a man from Kenya who lived far from the most famous of all his offspring.

Interestingly, Jacobs describes Barack Sr. as a “man moved by the dream of a better world” and as a “fantasist,” which is defined as a person who “indulges in fantasies.” Although not alcohol-induced, his son’s desire to create a Utopian society where bureaucrats are tasked with overseeing the fair and equitable treatment of all of humanity certainly indicates an inherited propensity for grandiose thinking.

Jacobs contends that Boston lawyer Ed Benjamin, who knew Barack Obama’s father, said he, like his son, was “very charming…[and] an extremely bright and elegant guy.” Turns out pompous charisma didn’t count for much, because according to Jacobs’ account, the African father that Barack Obama Jr. speaks of in his autobiographical book, Dreams from My Father, was a nightmare.

Seems the ‘other Barack’ told “self-aggrandizing stories,” and was a “vile… drunken, wife-beating bribe-taking bigamist, of extreme arrogance, who spent much of his life… bemoaning his fate and running down rivals.”

It’s interesting because if you cross out “drunken, wife-beating, bribe-taking bigamist,” and leave in the “extreme arrogance… bemoaning his fate …running down rivals” and telling “self-aggrandizing stories,” it sounds like a description of the current occupant of the White House.

Two generations of Obamas achieved notable firsts, the elder being “the first African student in Hawaii” and his son, a professed Hawaiian native, the first African-American President of the United States.

Sally Jacobs chronicles Barack Sr.’s subsequent dismissal from Harvard with only a Master’s degree, barred from finishing his dissertation because of a “complicated private life” that consisted of a previously undisclosed wife and offspring. Yet expulsion from a Ph.D. program didn’t stop the Kenyan from demanding to be referred to as “Dr. Obama” and demeaning anyone he considered intellectually inferior by asking: “Where were you when I was getting my training at Harvard?”

President Obama is renowned for a cool self-control his father clearly lacked. However, on occasion, when confronted by political adversaries does exhibit a snippy lack of patience and a style of manipulation that ranges from charming to petulant to scolding. Thanks to Jacobs’ book, America now finds out that in Barack Obama’s gene pool is a proclivity to be “charming and loving and wonderful” one day and stern and punishing the next.

Kenyan journalist Philip Ochieng recalled the President’s father to be “charming, generous and extraordinarily clever,” but also “imperious, cruel and given to boasting about his brain and his wealth.”

Ochieng might as well have been describing President Barack Obama when he said the elder Barack “liked people. But he was a lot about himself. He was arrogant, but it was a very seductive arrogance. Not unpleasant at all. He had big ambitions, big unrealistic dreams. He just needed to dominate, and that is what caused so many problems for him.”

According to Jacobs’ research, the senior Obama’s childhood friend Peter Oloo Aringo, former six-term member of the Kenyan Parliament, said that similar to Obama Jr. – a leader perfectly comfortable dictating his idea of principles to America – Obama’s father also demanded that others “rise up to his standards.

The President’s father, again just like his son, liked to “share wealth” with his village. According passages in The Other Barack, “On his return to the villages of his childhood, Obama came laden with gifts.” Similar to President Obama’s status with his loyal voting base, “In the eyes of the villagers, Obama [Sr.] was one of the biggest men around, and they anticipated his visits with excitement.”

The similarities between the two Barack Obamas abound, and some are downright uncanny considering the fact that the two were barely acquainted, such as being generous to others and then “sending the bill to someone else.” Obama’s father sent his bar bill to high-ranking government officials like the late Kenyan nationalist leader Minister Tom Mboya, a man who helped gain him access to an American education. In like manner, President Obama finances government largesse for one village and sends the bill to another.

Resembling his father, who was said to be “a master of the verbal parrying and one-upmanship” and “famous for his legendary black velvet baritone,” the President learned to verbally maneuver the political terrain with an inherited skill that elevated him to a powerful position on a global level.

It appears as if Sally Jacobs’ disturbing exposé strips away more of the mystery surrounding Barack the elder’s destructive demons. In addition, she chronicles his self-absorption, dishonesty, arrogance, intellectual condescension, and unrealistic world vision, and in so doing unintentionally reveals that those are the very traits President Barack Obama inherited.