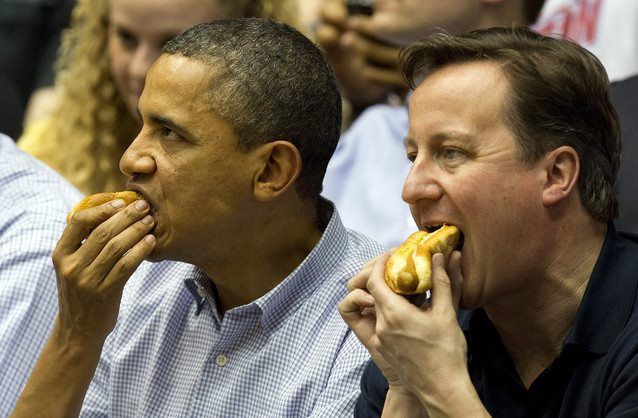 The White House is presently on a campaign to display sensitivity for the hardships Americans are experiencing during these tough economic times. Ever since it was reported that a Washington State top-rated 2005 Cabernet Sauvignon retailing for $399 was served to Chinese president Hu Jintao, wine labels for White House functions have been blurred from public view.

And so it will also be for a traditional State Dinner scheduled to take place for British Prime Minister David Cameron.  In order to keep America’s cork from popping, the exorbitant cost of the wine served will remain classified.

Tyler Colman, a wine blogger also known as Dr. Vino, calls the secrecy “vinous non-disclosure,” and believes that the “shift in menu protocol may reflect political considerations given the sluggish U.S. economy.”

Dr. Vino surmises that Mr. and Mrs. Obama, a couple who typically flaunt their ability to enjoy the high life, in the run-up to the 2012 election are “[p]robably sensitive to displays of wealth at a time when the economy is not firing on all cylinders.”

With that in mind, ‘hardship sensitivity’ may why the President decided to take Prime Minister David Cameron on a back-slapping boys’ night out.  Getting in touch with his Barry O’Bomber days, the President hopped aboard AF-1 with the Prime Minister and flew to Dayton, Ohio to attend the opening game of the NCAA Tournament.

Sitting behind one of the baskets in the student section of the University of Dayton arena, Dave and Barry talked March Madness, chowed down on all-American Michelle Obama-banned hot dogs, granted a half-time interview, and got chummy with college students.

In the process, the President proved that just like the rest of America, he is able to have an economical night out with a buddy – even if struggling taxpayers are forced to pay a whopping “$365,000, not including the staff costs and other expenses,” to fly the two men there and back.

At a Democrat fundraising dinner held at John Kerry’s humble Georgetown mansion, after dining on “char-grilled grass-fed New York strip steaks and white truffle mashed potatoes,” Vice President Joe Biden summed up the Democrats’ effort to be “sensitive to displays of wealth,” especially at a time when most Americans can barely afford to gas up the family car.

Standing inside a tent, bathed in soft pink lighting, 87 people paying $10,000-a-plate listened while Joe Biden shared an observation about Republicans: “These guys don’t have a sense of the average folks out there. They don’t know what it means to be middle class.”

With those words, the Vice President made it clear that according to Democrats, being sensitive to the middle class means the following: hiding the pricy labels on bottles of $300 wine; eating hot dogs at basketball games that cost the American taxpayer $365,000; and after collecting $870,000 from a group of steak-and-truffle-eating liberals, referring to them as “average folks.”