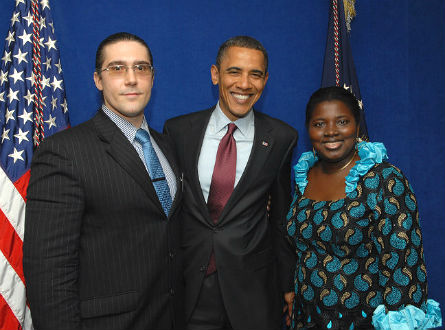 Recently, President Barack Obama released his list of “bundlers.”  Bundlers are a special group of “financiers who raise campaign money by soliciting high-dollar contributions from friends and associates,” and in turn get to attend fancy State Dinners with British Prime Ministers. One such donor to the President’s reelection campaign is Abake Assongba-DeRosa.

On her website Ms. Assongba describes herself as a woman who, after being “involved in the financial industry for over a decade … had the inclination to create the humanitarian non-profit organization called Abake’s Foundation.”

Besides being listed on “Obama’s campaign website as one of its [440] volunteer fundraisers,” Abake is also counted among an esteemed group of New York Obama 2012 contributors. So far, this year alone, Mrs. Assongba-DeRosa and husband Anthony JW DeRosa, a man who also claims to have a wealth of experience in the financial industry, have contributed more than $50,000 to Obama’s reelection effort.

Either way, Barack Obama has a unique group of supporters who want to see him reelected. In addition to Assongba, who originally hails from West Africa but has also lived in Paris and New York and is building a home in Florida, the Obama campaign recently had to return “$200,000 … to Carlos and Alberto Cardona, the brothers of a Mexican fugitive wanted on federal drug charges.”

Compared to the Cardona brothers, Mrs. Abake Assonga-DeRosa isn’t all that bad. According to her website, Abake only impersonates bank officials so that she can “better assist impoverished children in Africa by initiating Micro-Loans to women, as well as educational scholarships and localized farming grants.”

In addition to expanding her “foundation’s reach within the United States and the many children whom are also in need domestically,” it’s alleged that Assongba balances philanthropic efforts with fleecing rich people and using the money to support a presidential candidate who also fleeces people, albeit in a more subtle and dignified way.

Concerning the fraud charges leveled against Abake, Obama campaign spokesman Ben LaBolt downplayed the controversy, explaining that “1.3 million Americans have donated to the campaign, and [the campaign] addresses issues with contributions promptly.” According to Mr. LaBolt, “Some issues are easy to identify, others more difficult, but once an issue has been raised, we address it promptly, as we will do in this case.”

The Obama campaign’s rapid-fire response mechanism may explain why a photo of the President taken with the monetarily creative Abake in 2010 is missing from her Facebook page.

Still, despite a reported “trail of debts” Assongba supposedly left “with a former landlord [who is] demanding in court more than $10,000 in back rent and damages for a previous apartment,” and after records show she “was also evicted in 2004 after owing $5,000 in [back] rent,” the cherubic Obama donor with the big heart may not be a criminal after all.

Why? Because much like Barack Obama, Mrs. Abake Assongba-DeRosa sees herself as a “citizen of the world” who, unlike other people, has a “keen understanding of how the world works together.”

Unfortunately, there are certain people who don’t see it that way, and are accusing Mrs. Assongba of pilfering $650,000 from Swiss businessman Klaus-Werner Pusch.  Allegedly, it was Pusch’s pennies that were used to help finance a multimillion-dollar home for herself and her husband in the Sunshine State. As a result, instead of attending tony fundraisers in the Big Apple, Abake is fending off a civil suit in Florida.

Regardless, in Democrat circles Abake remains a generous woman. It has been reported that “Assongba has given more than $70,000 to Democratic candidates in recent years…Her larger contributions include $35,000 to the Obama Victory Fund, a joint fundraising committee between Obama and the Democratic Party, and $15,000 to Democrats running for Congress.” Records also show that in April 2011 her husband also gave $15,000 worth of other people’s money to Obama’s victory fund.

It does stand to reason that Barack Obama would be Abake’s candidate of choice, since she and Barack are so much alike. In fact, the similarities are mind-boggling. For starters, Abake originally hails from West Africa but has spread her joy all over the world, which is similar to joy-spreading community organizer Barry Soetoro aka Barack Obama, whose heritage is rooted in Kenya, Indonesia, Hawaii, and the South Side of Chicago.

Both Abake and Obama recruit volunteers, accept Visa, MasterCard, American Express and Discover, sell T-shirts, and are really into cyber-activism. Abake is concerned with gathering money to feed the children and Obama is concerned with making sure women who don’t want children don’t have to pay to get rid of them.

Let’s face it, despite the accusations of fraud, Barack and Abake are a perfect fit personally, ideologically and politically — which may be why, due to a full week of other political controversy, “Obama’s campaign declined to comment on whether its vetting procedures were thorough enough,” and more importantly, declined to comment on “whether [Abake] Assongba’s [$50,000] contribution would be refunded.”