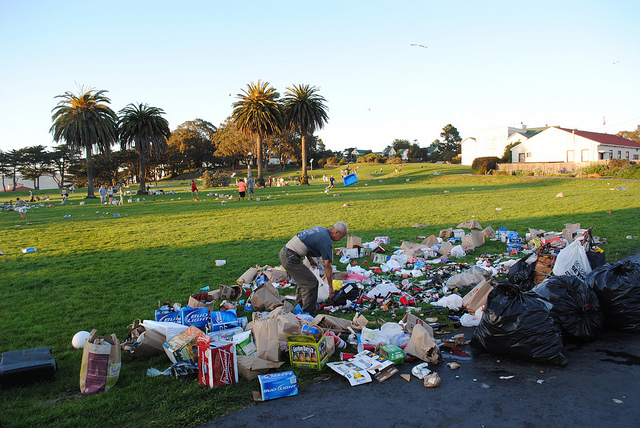 There are many things about liberals that are infuriating, but one of the most aggravating is their unabashed hypocrisy.  From the President of the United States to Earth Day revelers in a San Francisco park, what sets liberals apart from sane people is that they rarely do what they demand from everyone else.  It’s almost as if the left’s ideology embraced a tenet that if you preach about it, and if you look and talk the part, you’re instantly exempt from actually doing what it is you promote.

In other words, liberals are like grown up Boy Scouts who love to wear the uniform and recite the oath, but refuse to live by it.

That talk-but-won’t-walk tendency is exemplified when the President talks down the moneyed class and then fills his campaign coffers with gifts from rich people.  It’s Michelle Obama hawking healthy food and publicly eating anything but.  It’s the mentality that tries to force generosity by way of government mandate on people who already give, initiated by folks like Joe Biden whose charitable contributions totaled all of 1.5% of his 2011 annual income.

Time and again, liberals prove that secretly they adhere to the motto: “For thee, but not for me.” And nothing illustrated that philosophy like this year’s Earth Day in Fort Mason and Dolores Park in San Francisco.   Spurred by the desire to participate in a 42-year-old event, eco-minded activists from all over descended on green San Francisco’s Marina District parks in commemoration of Earth Day. The goal was to draw attention to the global effort to protect the planet, but when the planet-protectors left the premises it was littered with piles of refuse.

Planet-conscious people left behind empty liquor bottles, beer cans — including the rings that could choke Jonathan Livingston Seagull to death — as well as pieces of broken-up furniture.

This isn’t a unique situation; green-minded Obama supporters were so overwhelmed with joy on the day of President’s inauguration in 2009 that they lost their heads and left 100 tons of garbage strewn across the National Mall.

Can these be the Chevy Volt drivers who pack their groceries in cloth bags and fill recycle bins with glass and aluminum and would rather be flogged with a cat-o’-nine tails than sip from a Styrofoam cup?  When they gather en masse to support a pro-environment politician or attend a global Earth Day celebration, greenies leave it looking like a garbage dump. Perhaps it is a case of the 99 percent giving the Volt-owning one percenters a bad name.

Apparently the symbolism of participating in a group event is all the identity a liberal needs to feel like something was accomplished.  In all they do, it appears as if they believe exhorting others to adopt their political philosophy fulfills the requirement for personal action on their part. When liberals gather for Earth Day and then leave mountains of trash scattered all over a public park, they must feel they have a right to do so, because the mere fact that they care about the planet is worth more in their minds than cleaning up the disgusting mess they generated and then left behind.

But then again, leaving behind messes is what liberals do best. Take Barack Obama for example. While he hasn’t literally littered the country with empty Bud suitcases or tossed cigarette butts out the window of his armored limousine, what he has made is a mess of our economy and foreign policy.