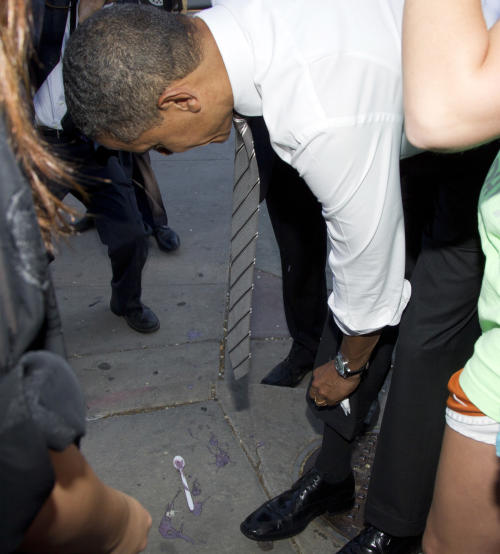 Barack Obama was in Boulder, Colorado giving another sermon-style “I believe in you” speech, this time to college students at the University of Colorado. On occasion, when he’s on the road without Michelle to monitor his food choices or share his French fries, the President has been known to partake of unhealthy fare at greasy-spoon burger joints.

Such was the case in Colorado. Before expending preacher-like energy instructing college students to turn to somebody and repeat “Don’tdoublemyrate,” the President instructed his entourage to stop so he could fuel up at “A Boulder Burger Institution” called “The Sink.” Featured on the Food Network’s “Diners, Drive-Ins and Dives!” the Sink’s menu features foods the President’s palate might naturally gravitate towards.

Take for instance Obama’s recent affinity for Cuban-style guayaberas. Just thinking about his Colombia wardrobe might have caused the hungry man to choose the “El Cubano” sandwich for lunch.  Anything on the menu with turkey in the ingredients requires no explanation, and with the way things are going in the polls lately, although he’d never admit it, the “Sink Burger” might have been the most apropos choice for the President to make.  To keep his spirits up and to feed his ongoing delusion, the menu touts a beverage the narcissistic Obama might be attracted to called “Rock Star Energy Drink.”

According to Barack he settled for a mundane slice of pizza.  However, what the usually pressed-and-primped President didn’t anticipate happening but conveniently provided a laugh line for his University of Colorado student loan speech was that, while shaking hands with fans outside the establishment, a young woman in the crowd “got so excited” she splashed yogurt all over his trousers.

The President pointed out that “more hazardously she [also] spilled yogurt on the Secret Service,” a remark which, after the Secret Service hooker controversy in Colombia, probably should have been omitted from his humorous repartee, especially since the pool report described “The Sink [as]…a divey kind of place that seems more about the beer than the food.”

Nevertheless, some of the pro-biotic-infused concoction did hit the President’s pant leg, requiring him to clean himself up with a towel, after which It’s-All-About-Me Obama told the excited Kolbi Zerbest, “Getting yogurt on the president, you’ve got a story to tell,” to which she politely replied, “Well yeah, I’m very embarrassed of the story now, but it’s a pleasure, the pleasure is all mine.”

In the end, the whole incident not only provided a chuckle for the college kids, it also diverted the Secret Service detail’s attention, if only for a few seconds, from the controversy surrounding the Hilton Hotel and the Hotel Caribe in Cartagena.

But most importantly, although she didn’t realize it at the time, the splattering yogurt incident in Boulder confirmed Michelle Obama’s prophetic insight. At a campaign event just last week, when referring to her husband bringing America “out of the dark and into the light,” Mrs. Obama exhibited an excitement level rivaled only by the woman with the flying yogurt as she reminded America that when it comes to Barack Obama, “We have an amazing story to tell.”