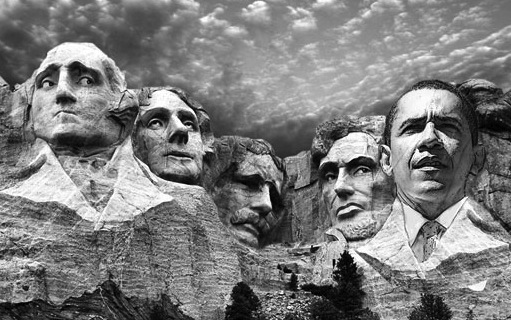 America has had 43 presidents, but only a handful of them are considered truly great.  First, of course, is the humble general and commander-in-chief of the Continental Army, George Washington, and certainly right behind him is Abraham Lincoln, who saved the Union and whose actions led to the abolition of slavery.

Then there was foundational figurehead Thomas Jefferson, who wrote the Declaration of Independence and doubled the size of the country; a surprising wartime leader named Harry Truman whose bold decision brought the end of WWII; and the incomparable Ronald Reagan, communism-buster and Cold War victor.

Now, after just three years, a new name is being bandied about as a possible addition to the short list of presidential notables, and that name is Barack Obama.

Recently, while campaigning for her husband’s re-election in Omaha, Nebraska, Michelle Obama declared, “We made history.”  After less than one term, it might seem a bit premature to claim historical preeminence, but truth is, by being identified as America’s first African-American/biracial president, Obama has in fact made history.

In addition to his initial achievement of surmounting racial prejudice, according to his wife Michelle, in less than one term, not only has the president led America “out of the dark and into the light,” but his pioneering leadership has also catapulted him into the realm of presidential greatness.

Oddly enough, when backing up her “making history” claim, the first lady chose not to cite Obama’s economic, foreign, or social policy endeavors.  Instead, the first lady focused her attention on Obama’s $950-billion signature legislation, the Affordable Healthcare for America Act.

Expounding upon the president’s signature achievement, Michelle Obama said, “Two years ago, we made history together by finally passing health reform. And because we passed this law, insurance companies will now have to cover basic preventive care — things like prenatal care, mammograms, contraception — at no extra cost.”

If “making history” includes trying to accommodate the sexual activities of American citizens, exhibiting intrepid leadership when standing against the United States Constitution, imposing an antagonistic mandate upon religious organizations, and placing contraceptive availability above the free exercise clause of the First Amendment, then Barack Obama certainly has made his mark.

Moreover, when compared with great moments in history, listening to Michelle Obama laud her husband’s legislative victories makes the Louisiana Purchase pale in comparison to the monumental magnitude of dispensing morning-after pills and condoms free of charge.

To be fair, if for nothing else, with fortitude and courage similar to those of five-star general and 34th President of the United States Dwight D. Eisenhower, Barack Obama certainly does deserve a medal for prevailing in a Democrat-contrived “war on women” and for his unflinching insistence upon “a regulation mandating that insurance companiesprovide women with free contraceptives.”

However, for some historical perspective, consider the words of limited-government proponent and Sage of Monticello Thomas Jefferson.  When Jefferson made the observation that “[i]f we can prevent the government from wasting the labors of the people, under the pretence of taking care of them, they must become happy[,]” what he probably wasn’t anticipating was the government offering to take care of happy people by promising them taxpayer-funded medical care and free birth control.

Moreover, when Thomas Jefferson penned the Declaration of Independence, the foundational premise of self-government hinged upon the objection to Britain’s oppressive king doing things like sending “swarms of officers … hither … to harass [the colonists], and eat out of their substance.”

At the time, little did Jefferson or any of the Founding Fathers know that one day there would be a czar-appointing, tax-loving, regulation-imposing president counted among their ranks, whose policies are the antithesis of the founding principles they established and, for lack of a better comparison, who would be America’s very own modern-day George III.

Try as the Founders might, two centuries ago it was impossible to foresee a big-government bureaucrat type as president, a man teetering on the edge of despotism who would sidestep the Constitution and seize for the federal government the power to mandate that “nearly all health insurance plans in the United States must provide women with sterilizations and all FDA-approved contraceptives (including those that can induce abortions) without any fees or co-pay.”

Nor could the founders of our nation fathom that a faux-exuberant version of Abigail Adams would justify her husband earning a second term by characterizing free access to birth control as “making history.”

In over 200 years, 42 history-making presidents have come and gone — but never has our nation’s hard-fought heritage been subject to a leader who dares profess historical greatness for implementing policies that force American citizens to fund insurance coverage for free contraceptives and abortion on demand.

Furthermore, say what you will about unwavering spousal support, but Mrs. Obama handing out kudos for squelching freedoms established upon the tenets of the U.S. Constitution is downright extraordinary.  Maybe someone should inform both the president and the first lady — not that they would care — that it was Thomas Jefferson who cautioned, “The democracy will cease to exist when you take away from those who are willing to work and give to those who would not.”

Therefore, in keeping with Michelle Obama’s historical vision of her history-making husband, as the 2012 election rapidly approaches, there’s no better time for America to honor Barack Obama this Election Day than by sending him a message of historical proportions.