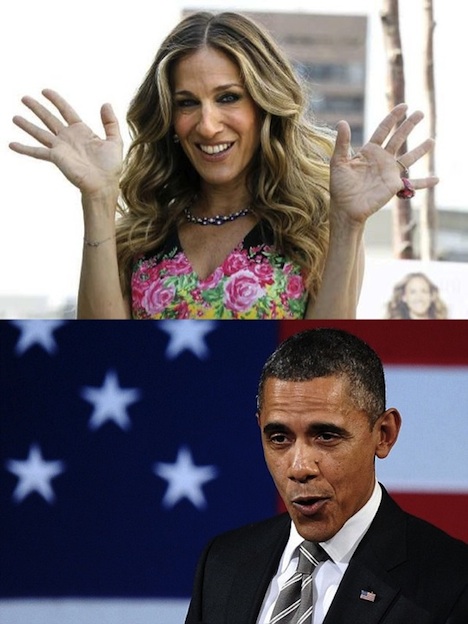 Using up who-knows-how-many carbon credits and causing massive gridlock, Barack Obama arrived at Sex in the City star Sarah Jessica Parker’s West Village pad for first leg of “A New York Night” and the 162nd of the 163 fundraisers he’s attended since he took office. Fresh off a disastrous campaign junket to Ohio, the President was warmly greeted with hugs and kisses from the hostess and very much at home among sympathizers who understand how hard a rotten performance can be on a struggling “actor.”

These guests, all of whom obviously had an extra $40,000 lying around, certainly were not the type of folk Barack Obama prides himself on representing.

Noticeably missing from the group was Parker’s husband, Matthew Broderick. Apparently Ferris Bueller couldn’t get the day off from the Ira and George Gershwin-scored Broadway musical he’s starring in entitled “Nice Work if You Can Get It.”

If Matthew stayed home he could have saved jazz/funk musician Trombone Shorty the trip up from New Orleans.  The Broadway star certainly could have enhanced the evening with some of the tunes from his hit show. For example, preceding Obama’s usual fundraising speech the song “Blah, Blah, Blah” would have fit in nicely.  How about a tune the socialist-minded Obama probably knows the words to, “Someone to Watch Over Me?”

Chef Michael White, owner of New York’s elegant Italianate restaurant Marea, located on Central Park South, catered the affair. Aretha Franklin, who arrived early and left 20 minutes later, described the meal as “chicken with a mustard sauce, diced tomatoes and a lot of relishes on the side of the plate.”

Apparently anxious to have a proper Aretha-sized portion, the singer chose not to say for the main course, which was “Marea steak,” a dish the NY Times described as “a sirloin…[that]… would do epic battle with the beef at any steakhouse in town.” Wagyu beef is so 2009.

To what corner the “A New York Night” $3 donation contest-winner Maryland healthcare worker Robin Hunt and her guest, mother Elvita, were relegated, no one outside the charmed circle knows. But if Sarah’s seating arrangement was even remotely similar to what “Dinner with George Clooney” contest winners endured (which was sitting in the back of the tent), there is a chance Elvita and Robin dined with little James Wilkie, who clapped enthusiastically when the President spoke.

When she introduced the President and First Lady, Sarah started by saying “It is a great, a rare, a very special and I’m assuming a singular treat to welcome you into our home–our radiant, our extraordinary first lady.” Sorry, but that cheesy comment sounded strangely like an infatuated school girl trying to get on the good side of her crush’s main squeeze.

Michelle Obama, resplendent in a “navy silk dress with a wide belt and a bolero and an armload of gold bangles,” listened intently as the effusive Sex and the City star continued pouring on the praise.

Parker then addressed the President by saying that the crowd that paid $80K per couple weren’t just there for the meal but gathered together “hopefully and with enormous enthusiasm” for the “beloved current and future president of the United States.”

Later on, a self-effacing President followed up by sharing with the group that he felt Sarah’s guests were really there to see Michelle, a woman who Barack alleges was at first “a reluctant politician’s wife.”

Obama then thanked Michelle who, despite her initial lack of enthusiasm, seems to have adjusted to the burdens of sumptuous living, for the “grace and the strength and…poise and…warmth that she has brought to an extraordinarily difficult task as first lady,” also mentioning that “This is sort of our date night.”

The President proceeded with his usual blame Bush-I’m not to blame-tough economy-we’ve got a choice speech. He then elevated the status of the entire room by telling those who’ve attempted to normalize Godlessness, promiscuity, adultery and immorality: “You’re the tie-breaker. You’re the ultimate arbiter of which direction this country goes.”

All told, Sarah Jessica Parker’s chichi function raised $2 million from those who showed up at her house, plus online donations and the $3 for a chance to chow down with Obama, which also brought in millions.

Barack and Michelle left the West Village with the contest winner in tow and headed toward the Plaza Hotel for another fundraiser, where guests paid a paltry $10,000 to attend.  The event was hosted by Sex and the City creator Darren Star and Architectural Digest editor Margaret Russell, and was co-hosted by Newark Mayor Cory Booker, who was released from the woodshed for the night.

Thanks to “A New York Night” President and Mrs. Obama scooped up millions for the Obama Victory Fund/Obama for America. And as another New York City “date night,” whose costs were also mostly shouldered by the American taxpayer, drew to a close, AF1 delivered the first couple safely back to Washington DC.

As for the Big Apple, thankfully it was loosed from the grip of Barack Obama gridlock, a relief the rest of America looks forward to delighting in come November.