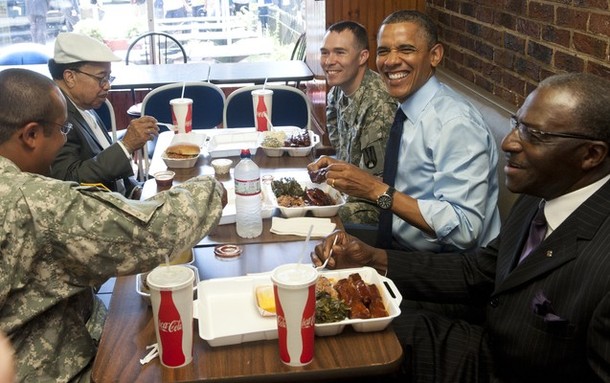 As Father’s Day approaches, President Obama is turning his attention toward teaching men how to be better fathers. To introduce the U.S. Department of Health and Human Services’ “Fatherhood Buzz” initiative, Barack Obama made an “unscheduled barbecue run” to Kenny’s BBQ Smokehouse in Washington DC.  It was there that the President met with four fathers who must have been stopping by for lunch on the spur of the moment. Two were soldiers — one from South Carolina, the other from Maryland — and the other were two local DC barbers.

Nurney Mason, owner of Mason’s Barbershop, and Otis “Big O” Gamble, a barber who’s cut hair at Mason’s for 45 years, were at the Smokehouse because both men are directly “involved in the administration’s effort to promote better fatherhood.” Mason’s shop was chosen to participate in President Obama’s Fatherhood Initiative Fatherhood BuzzBarbershop Tour, which is set to kick off in eight cities in mid-June.Buzz-cut Barack’s personal barber Zariff, who is flown in from Chicago’s Hyde Park to the White House twice a month allegedly on the taxpayers’ dime, wasn’t in town, so he didn’t attend the ‘unscheduled’ barber’s luncheon.

The reason for the impromptu photo op was to promote the idea of connecting fathers to barbers in neighborhood barbershops.  President Obama, who hasn’t seen an actual barbershop chair in four years, believes that besides playing checkers and getting a haircut, “barbershops are a good place” for men to share advice on taking responsibility for children.

According to a White House statement, the “Fatherhood Buzz” program is “designed to reach out to dads with positive information through barbers and barber shops as a part of the administration’s longstanding Fatherhood and Mentoring Initiative.”

Every three months a different ‘buzz’ topic will be featured. The first is “financial literary and job training, and information about these issues will be distributed through barbers to fathers around the country” — an effort also paid for with taxpayer money. So in other words, every quarter the HHS will circulate millions of dollars in “information” to barbershops and have barbers hand out, in place of sugary Tootsie Pops, unsolicited fathering tips to guys who just want a simple haircut.

Not for nothing, but it sure does seem like the government is now inserting itself into the barbershop business too. What next? Is an edict going to come down from the Obama administration that the Sports Illustrated swimsuit edition has to be changed up for Parents Magazine and every male customer must receive a complimentary government-issued copy of “What to Expect When You’re Expecting?”

At any rate, over a rack of ribs, collard greens, and cornbread Obama told the four men that the objective is to “work with barbershops to figure out how we can get better information to fathers about resources that are available to them so they can find job training programs…[and]… support groups for fathers.”

Maybe someone should suggest that for Father’s Day Barack Obama do the men and women of America a solid and volunteer to return to Chicago permanently.  If only Obama were living in Chicago and getting his bimonthly low cut at the Hyde Park Hair Salon, unemployed fathers wouldn’t need a barber to steer them toward a job training program.

Moreover, unlike women’s beauty parlors, which are always buzzing with non-stop chatter, barbershops can become refuges for men.  At Mason’s the big attractions are board games and “trash talk.” Maybe Obama can change it, but right now what you won’t hear is a Nurney’s patron asking for parenting tips from “Big O” Gamble as he maneuvers a straight-edge razor around an Adam’s apple.

Moreover, during the unscheduled Ribs, Razor Strops and Hot Shave session, in addition to revealing that he’s planning to spend even more of our hard-earned money on yet another useless government initiative, Barack Obama also sent a mixed message.

Just a few weeks after advocating for same-sex marriage, America’s “first gay president” actually said that “It turns out that with the father being involved, the kids are less likely to do drugs … girls are less likely to get pregnant. And so that message is something that we want to make sure gets out there.”

Despite the well-meaning Father’s Day effort, unless the President is open to either revising his current stance on gay marriage or changing the name of the “Fatherhood Buzz” to the “Personhood Buzz” or “Parenthood Buzz,” it might be best if he sticks exclusively to unscheduled BBQ luncheons with “Big O” and Nurney and refrain from offering anymore unwanted advice.

Update: Seems someone forgot to pick up the $55.58 lunch tab.  Maybe Obama didn’t pay for his spare ribs because he figured the two elderly barbers and the military men should show their appreciation as well as their support for “sharing the wealth” by paying for his lunch.