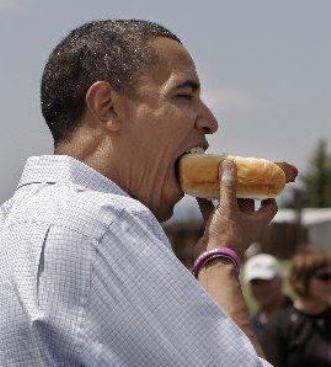 Never again can anyone ever accuse Barack Obama of not accomplishing great things during his term as president. We all know that “real men don’t eat” quiche, which is why when he’s out on the road Barack Obama makes Guy Fieri, the corpulent star of “Diners, Drive-ins and Dives,” look like a fast-food amateur.

If he did nothing else, the President has managed to order and eat more hot dogs, chilidogs, spare ribs, hamburgers, shaved ice, and ice cream sundaes on camera than any other president in the history of America.

When Obama is in town, be it Boulder, Colorado, home to The Sink, or Atlanta, where the renowned chilidog landmark The Varsity, a sea of fast-food opportunity awaits his breathless self.  So those working the counter in any city slated to be visited by Barack Obama as he zigzags across America campaigning this summer better straighten their paper hats, because dollars-to-donuts, it’s almost certain poboy Barack will be paying a visit.

Obama loves greasy spoons so much he seems to use any meeting where Michelle is not in attendance to tuck into drippy, messy mouthfuls of something you can eat with your hands.

He’s taken Dmitry Medvedev to Ray’s Hell Burger and a foursome of two barbers and two military men out to Kenny’s BBQ Smokehouse for lunch.  And whether it’s a world leader or some everyday folk from back in the old Chicago neighborhood, whenever Barack Obama is photographed about to eat food Michelle considers haram, the look of excitement and anticipation on his face is priceless.

It is quite obvious that while Michelle is away hawking “I Meow for Michelle” Obama 2012 cat collars, “Here I Come to Save the Day” Mighty Mouse Barack uses the opportunity to play. Come to think of it, when Michelle isn’t around the President acts like a naughty schoolboy disobeying Mom.  He dumps the boxed lunch she sent him out on the campaign trail with and heads straight for the fried cheese puffs in Milwaukee.

As a matter of fact, he treats Michelle’s healthy eating edict as he treats the US Constitution — as if it doesn’t exist. One would think that if Michelle were around for one of these pit stops, she’d send a Myplate sailing straight for her husband’s head.

Barack appears to be powerless when it comes to forbidden food, even after The Physicians Committee for Responsible Medicine, a nonprofit advocacy group, “asked the White House to stop staging photo opportunities that show the commander-in-chief consuming burgers, hot dogs and other junk food that the group contends cause cancer, obesity and other ailments,” he still hasn’t been able to control himself.

Nonetheless, the President shouldn’t be held accountable for his poor choices, because most of the stops are unplanned and may only be the result of Obama falling victim to a sudden urge for processed meat, frozen creamery and/or deep-fried potatoes…sorry, vegetables.

Recently, just a few days after “going for it” with an ice cream sundae at a New Hampshire Dairy Queen, with wifey nowhere in the vicinity, the fast-food junkie made the most of another golden opportunity.

Here’s how it probably went down: A procession of black limos pulled up to The Varsity, men in black stepped out of the cars, checked out the situation, and when all was clear the Beast’s door opened and a salivating President of the United States emerged and sprinted through the doors.  He scurried in and then bellied up to the stainless steel counter, took orders shouted from behind and then barked out “five chili dogs, four regular dogs and one hamburger,” swearing the whole time it was “Not just for himself but for his staff.”

Possibly out of respect for the doctors who requested the President not scarf down nitrate-filled food on camera, there are no actual pictures of Obama with chili running down his chin at The Varsity, so only the Secret Service knows for sure if he consumed the food back in the limo or dined on the premises.

Nevertheless, sort of like an illegal alien in a voting booth canceling out the legitimate vote of an American citizen, whenever Obama chooses to publicly indulge in artery-clogging yummies, Mr. ‘What’ll ya have?’ Obama is successfully becoming the junk-food counterpoint to his health-food advocate wife.