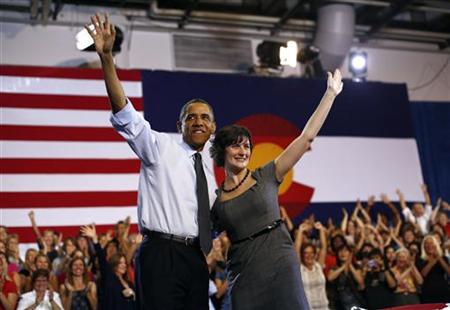 The Obama 2012 campaign, featuring Sandra Fluke, the “eloquent advocate for women’s health” and Georgetown University Law School graduate whose claim to fame is complaining that for lack of free contraceptives a friend with polycystic ovary disease lost an ovary, converged on Denver, Colorado.

The thrust of yesterday’s truth-stretching stump speech was to convince 4,000 swooning women that Mitt Romney is Ward Cleaver.  Primarily, the President was there to persuade the ladies that electing him for a second term would ensure that women’s issues would continue to take precedence over lesser concerns such as Afghanistan, the economy, the housing crisis, national security, illegal immigration, unemployment and anything else Obama has royally messed up.

Shifting away from hinting at curtailing Second Amendment rights, the President then appealed to a full palette of women in the crowd.  The group included moms, grand moms, and those who exercised the right to choose not to be moms.

Nevertheless, in the same way Obama stresses that accomplished individuals shouldn’t take credit for their successes, in like manner he took no credit for his failures and passed blame to G.W. Bush for the policies he said “got us into this mess” — policies that, Lord have mercy, he’s “spent… three and a half years trying to recover from.”

Alluding to the sacred rite of abortion, Obama referred to it as women making their “own health care choices.” He told the crowd that they deserved a president who would fight to uphold that care and that Mitt Romney would “take us back to the policies more suited to the 1950s than the 21st century.”

Then, Obama chronicled a litany of 1950’s-type things that will happen if Romney is elected president, some of which included: “going broke just because one of your loved ones gets sick,” being denied “coverage based on a preexisting condition, like breast cancer, or cervical cancer,” being charged  “more for care just because you’re a woman,” having “bosses” make health care decisions for women and, without free contraception, facing a future full of “ovarian and other cancers.”

And of course he broached the fate of female students having to “choose between textbooks or the preventive care” — like a spur-of-the-moment “preventive care” visit to Planned Parenthood.

The President accused Mitt Romney of disagreeing with him and Ms. Fluke when Obama said that Romney, rather than retaining the right to kill unborn children dead, would take the Affordable Care Act and “kill it dead.” Then, he said Romney would do the unimaginable and “get rid of” Planned Parenthood.

While in Denver, Obama also took credit for saving people sentenced to die from cancer and dragged his dead mother into the conversation who, like the late Ranae Soptic Romney-killed-her lie, the President claims might have lived if she had “spent less time focusing on how she was going to pay her bills and more time on getting well.”

Barry talked about his late mother Stanley Ann “being in a better place,” mentioned how an Obama Presidency 2.0 is the only thing standing between Sasha and Malia living in an America where they’d have “fewer choices than anybody’s boys do,” and encouraged illegal Dreamers when he vowed that he’d keep “building an economy where no matter what you look like or where you come from, you can make it here if you try.”

But despite shirking responsibility for the abysmal state of the nation and attempting to scare the bejeezus out of American women, probably the most stunning statement had to do with Barack Obama discussing equal pay.

Clearly, Barack Obama must have forgotten that his own female staffers are paid on average $11,000 less than the men employed by the White House, because he said “Think about what it means when a woman is the main breadwinner for her family, but she’s taking less pay home, doing the same work as a man, just because she’s a woman. That’s not right.”

Barack ‘Lilly Ledbetter’ Obama might have confused himself with Mitt Romney when he claimed that when the former Massachusetts governor’s campaign “was asked if he’d fight to guarantee an equal day’s pay for an equal day’s work, you know what the campaign said? They said, ‘We’ll get back to you on that.'”

After failing to “get back to” the underpaid women on his own staff, the President then went on to share that he wants his “partner” in the “journey of life,” Michelle — the woman attempting to control the diet of the entire nation — to have “control over her health care choices.”  Obama wants to make sure that “when [Michelle’s] working, she is getting paid the same as men.”

Then, Barack Obama actually spoke these words: “I’ve got to say, first ladies right now don’t — [get paid] — even though that’s a tough job.”

So there it is! In Denver with Sandra Fluke, in addition to healthcare pledges and dire Romney warnings, on behalf of women being properly compensated Obama may have been hinting that if he’s reelected, while Michelle’s enjoying yet another 10 million dollars’ worth of taxpayer-funded vacations, she’ll also earn a paycheck.