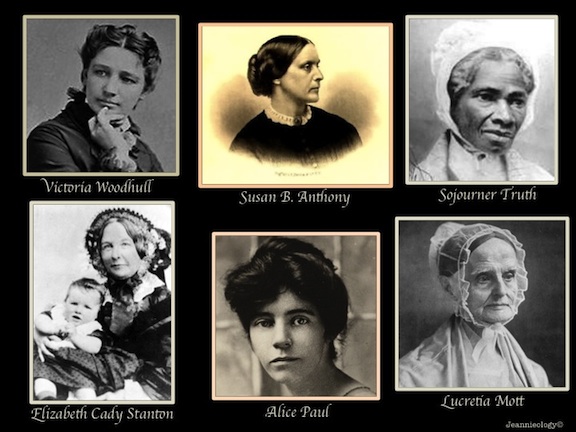 America now knows that much like the sixth sense of Secretary of State Hillary Clinton, Nancy Pelosi also speaks to dead people.  And not just any group of apparitions; the ghosts Nancy claims have contacted her are suffragists Susan B. Anthony, Elizabeth Cady Stanton, and Alice Paul, all of whom Nancy claims spoke to her once during a visit to the White House.

Paranormal Pelosi shared with the “We Power” Women’s Political Committee that after becoming part of the House leadership, when meeting with President G.W. Bush for the first time she was visited by the ghosts of the American pioneers of equality for women.

Pelosi swears that while Bush was talking, his voice faded and “this other thing was happening” to her. Pelosi claimed her “chair was getting crowded in” by departed women’s libbers hoping to share a seat at the table with none other than Ms. Pelosi.

It’s important to note that this is the same woman who believes Republicans are the “E-coli club.” But that aside, referring to the ghosts that paid her a visit Nancy said that “My chair was getting crowded in and I couldn’t figure out what it was.”

Then, she said she realized that “Susan B. Anthony, Elizabeth Cady Stanton, Lucretia Mott, Alice Paul, Sojourner Truth… were all in that chair.”  Nancy swore, “I could hear them say: ‘At last we have a seat at the table.’ And then they were gone.”

Nancy Pelosi’s experience places her into an exclusive group that includes former first lady Hillary Clinton who, while living in the White House, regularly communed with Eleanor Roosevelt and Mahatma Gandhi.

Jean Houston, a self-styled “sacred psychologist,” felt that at the time, the former first lady carried on her shoulders “the burden of 5,000 years of history when women were subservient . . . probably more than virtually any woman in human history – apart from Joan of Arc.”

Therefore, Mrs. Clinton looked to Eleanor for “guidance, encouragement, and insight,” and once wrote that Mrs. Roosevelt usually responded by telling her to “buck up, or at least to grow skin as thick as a rhinoceros.”

And now, we come to find out that our “feminist foremothers” wanted a seat at the table with none other than Nancy Pelosi.  Could it be that they wanted not to sit with Nancy, but to push her off the seat?

Although Mrs. Pelosi deduced that the forerunners of feminism speaking to her from the grave was a supernatural affirmation of her views and the liberal thrust of the Democrat Party she represents, she’s dead wrong.  It’s very possible that the message these champions of women’s rights wanted to deliver would be more properly directed toward pro-choice Pelosi, rather than pro-life Bush, because the women Nancy claimed had whispered in her ear were, unlike herself, all “pro-women, pro-life.”

If the group had hung around any longer, Ms. Pelosi might not have liked what Susan B. Anthony and her fellow spirits had to say to someone who claims that women’s rights include the type of wrong thinking that voting against federal funding for health plans that cover abortion is like “letting women die on the floor.”

In the 1869 edition of The Revolution, the weekly “official voice of the National Woman Suffrage Association,” founder Susan B. Anthony wrote this of abortion: “Guilty? Yes. No matter what the motive, love of ease or a desire to save from suffering the unborn innocent, the woman is awfully guilty who commits the deed.”

Maybe instead of trying to share a seat with Nancy, Susan B. showed up to knock some sense into that hard pro-abortionist head of hers.   And Anthony would not be alone; the ghost squeezing Pelosi in from the other direction was Elizabeth Cady Stanton. On February 5, 1868 in The Revolution, co-founder Stanton referred to abortion as “infanticide.”

In an 1873 letter to Julia Ward Howe, Stanton lamented, “When we consider that women are treated as property, it is degrading to women that we should treat our children as property to be disposed of as we see fit.”

If Pelosi knew anything about Alice Paul, author of the first Equal Rights Amendment, it would cramp Nancy’s style, not her seat. Pro-life Paul believed that “Abortion is the ultimate exploitation of women.”

And then there is that woman of faith recently memorialized in the Capitol, ex-slave Sojourner Truth.  Sojourner was supposedly also squeezing in on Nancy’s personal space. In her famous “And ain’t I a woman?” speech, Sojourner spoke of bearing 13 children and having only Jesus hear her grief when “most all [were] sold off to slavery.”

Almost all the women manifested in and around Nancy’s chair were Quakers, including Lucretia Mott. Unlike Pelosi, a woman who laments that Catholic “conscience thing,” Mott adhered closely to the Quaker “Testimony on Equality,” which states that “equality ought to lead to a position of protection of the right to life of unborn children, as well as an understanding, through all the various insights offered by prolife feminism, of how abortion attacks the equality of women and men.”

Although not present at the Bush/Pelosi meeting, Victoria Woodhull, the first female presidential candidate, penned to the West Virginia Evening Standard in the year 1875 that “Every woman knows that if she were free, she would never bear an unwished-for child, nor think of murdering one before its birth.” Woodhull believed that “The rights of children as individuals begin while yet they remain the foetus,” – a viewpoint quite contrary to the liberal left, who interpret “freedom” as a women’s right to murder her children before they are born.

And so, before Nancy Pelosi shares with pro-choice women’s groups the endorsement she believes she received from the true pioneers of equality, she’d best check her dusty old history book. Because the words of Susan B. Anthony and company tell us that their wanting “a seat at the table” with Nancy Pelosi would not be to affirm the strides liberal feminists have made in the last 150 years, but to issue a stern rebuke from the beyond the grave.