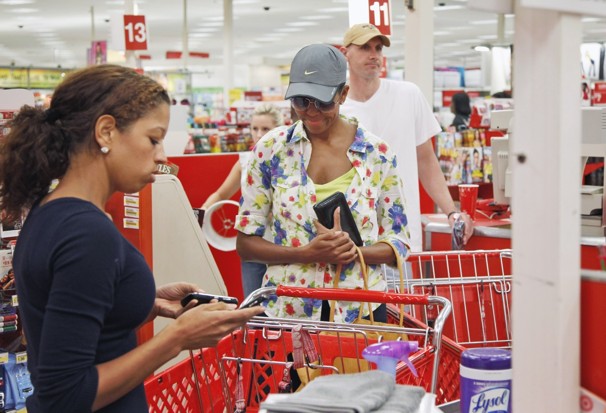 No sooner has Michelle Obama finished pushing the online course for the grocery shopping-impaired than now she comes up with a backup plan for those who find it impossible to keep the grocery cart far from the sugar, fat and salt aisle.  Mrs. Obama recently revealed that if her husband is granted a second term to finish up the debacle he started, she has plans to ditch talking about leaving food choices to the individual and instead force her own austere choices on Americans by eradicating offensive foodstuffs from the grocery store.

That’s right — the freedom-of-choice brigade is looking for yet another opportunity to deny the very thing they insist is mandatory when it comes to abortion.  In a recent interview, First Lady Michelle Obama said what she hoped to “accomplish in [her] second term,” was to “impact the nature of food in grocery stores.”

In other words, if freedom-loving Americans choose to be pudgy, lazy, fat/sugar/salt-eating pigs, the first lady has plans to limit access to an overhauled junk food trough.  Yep, in a second term, Michelle the Nabob of Nutrition will morph into Michelle the Enforcer of a new selection of food options.

In the area of choice, clearly Michelle believes in limiting freedom by way of government control of access.  In other words, because disobedient Americans are still milling around in the cookie aisle, the first lady has decided that it might be necessary to remove the cookie aisle from the grocery store. If she accomplishes her goal, stubborn shoppers will be forced to stay on the perimeter of the store, per Supermarket Shopping 101, because the aisles with the food Michelle doesn’t think Americans should be eating will be gone.

In her interview, Mrs. Obama shared that “with ‘Lets Move!,’ our goal is to end the problem of childhood obesity in a generation. And while we’ve seen some very profound cultural shifts, we still have communities that don’t have access to affordable and healthy foods.”  Is this woman actually trying to convince intelligent people that there are those among us who, despite obstacles, can manage to make it to the Apple Store to purchase an iPhone, but couldn’t find an actual apple if they really wanted one?

Michelle’s second-term goal indicates that holding sway over restaurants, vending machines, and school lunches wasn’t quite enough for her. The next step is to go straight to the source and dictate what foods and ingredients should be on grocery store shelves.  The “No” reply to the annoying standard checkout question “Did you find everything you were looking for,” is about to be answered with “Sorry, that item is no longer available.”

Mrs. Obama also has plans to continue “educating families” on healthy lifestyles, noting that doing so is a challenge in a society where “TV is rampant.”  Could it be that Michelle Obama is unaware that Americans don’t need her to remind us that a two-liter bottle of grape soda and a Costco-size bag of Kettle Chips do not constitute a serving of fruits and vegetables?

The “TV is rampant” comment should be another red flag, because when Michelle Obama proposes dictating what food is on grocery store shelves and then says “[W]e need to keep educating families about how to structure a life that is healthy in a society where TV is rampant and communities don’t have enough resources in terms of sports and activities,” it sounds like limiting television may be her pet project for Obama’s executive order-imposed third term, and forced community physical exercise for his fourth and fifth terms.

In addition, the first lady is a woman with a global vision.  Michelle expressed concern for the whole wide world when she said “How do we strengthen families and make them healthier — an issue not just in America but around the world.”  It would be interesting to watch Mrs. Obama attempting to “impact the nature of food” in Cuban and Venezuelan grocery stores.

So in the end it seems that Michelle Obama is not content with offering Americans healthy lifestyle suggestions.  If her husband, God forbid, is reelected, she has big plans to ratchet it up even more by officially replacing licorice with lima beans, cookies with cabbage and Doritos with daikon radishes.  And from the sound of things, the first lady isn’t going to limit her supermarket sphere of influence to her home turf here in America; she wants to expand her authoritarian food jurisdiction worldwide.