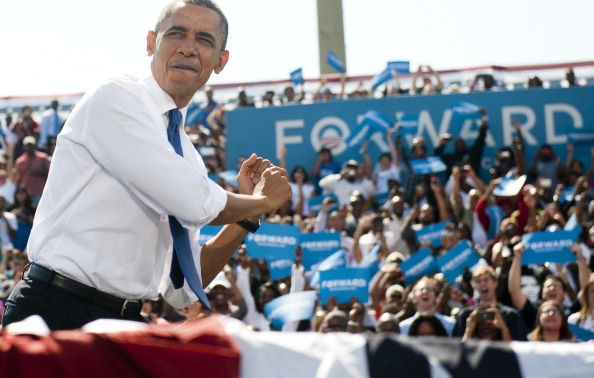 Recovering from an unsettling UNIVISION interview, Barack spent a good portion of his marshmallow interview reciting a laundry list of predictable talking points.  The President talked about getting out the vote, and encouraged listeners to register at gottaregister.com. For those who don’t know how to vote, the President recommended they go to “gottavote.com,” which is actually gottavote.org. So, if the DC community fails to show up on Election Day the Democrats can blame it on Barry getting his coms and orgs mixed up.

Obama reassured concerned radio listeners that, similar to the protection against vote suppression provided in Philadelphia in 2008, this time around the Democratic Party will have Eric Holder’s honest DOJ lawyers on the ground to defend the vote.

The President reminded the urban community that “This is gonna be a close election. The other side is spending more money than we’ve ever seen on negative ads, and I think, mischaracterizing my record.”  Think? You mean he’s not sure?

Ambushed on the air by EZ Street’s 18-year-old daughter Kala, hip-hop Barack explained that although America will be bankrupt, voting for him would ensure that college grads could start life debt free.

He talked education, cleaner air, fuel-efficient cars, keeping the deficit down for the next generation — but certainly not in the “short term.” In addition, he asked Kala to “grab a whole lot of her friends who may not be as, ah…focused” and encourage them “to ah…get out there and carry out their responsibilities.”

EZ then pitched a softball question to Barack on sports.  As the Islamic world teeters on the brink of war, Obama chose to talk about the Washington Nationals and said that his dream is to see the Nationals and “his” Chicago White Sox together in a World Series.

The rookie president also commented on the first-year leadership qualities of RG3, aka Robert Griffin III, the quarterback on the team with the politically incorrect name and logo, the Washington Redskins.  For what it’s worth, BO2 said he believed RG3 “is gonna be one of the best quarterbacks in the league.”

Talking hip-hop, Obama revisited his ‘Jay-Z and I have a lot in common’ routine from the $6 million fundraiser at the 40/40 Club where he said, “We both have daughters.  And our wives are more popular than we are.”  Obviously having never visited the Planned Parenthood Info for Teens Facebook page, the President said that daughters Sasha and Malia are only permitted to listen to music with clean lyrics.

Before EZ Street told the President that at the urging of Reverend Willie F. Wilson of Union Temple Baptist Church, home of a painting featuring famous Black leaders as Apostles at the Last Supper, he and the black community are praying for their leader.  And then, just prior to mentioning his grey hair, and giving out the wrong .com/.org web address a second time, Barack Obama flattered that “incredible person” Michelle.

Barack told a gushing EZ Street that “Politics is not her thing.” The President clarified that although “She definitely could be the president,” the first lady will “never run for the presidency — ‘cuz she’s got too much sense” — which is a flattering compliment coming from someone with absolutely no sense.