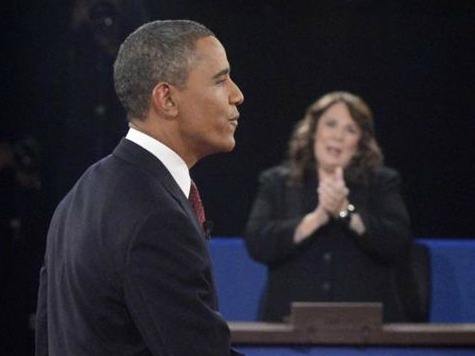 Many people are asking the question:  Did something seem rotten in Hempstead? In preparation for the second debate, moderator par excellence Candy Crowley was the one who picked the debate questions, including the hot-button query on the 9/11 attack in Benghazi, Libya.

That Libya question was presented to Barack Obama by Kerry Ladka in the following way:

LADKA: This question actually comes from a brain trust of my friends at Global Telecom Supply in Mineola yesterday. We were sitting around talking about Libya, and we were reading and became aware of reports that the State Department refused extra security for our embassy in Benghazi, Libya, prior to the attacks that killed four Americans. Who was it that denied enhanced security and why?

PRESIDENT OBAMA: Well, let me, first of all, talk about our diplomats, because they serve all around the world and do an incredible job in a very dangerous situation. And these aren’t just representatives of the United States; they’re my representatives. I send them there, oftentimes into harm’s way. I know these folks, and I know their families. So nobody’s more concerned about their safety and security than I am.

Now, Governor Romney had a very different response. While we were still dealing with our diplomats being threatened, Governor Romney put out a press release trying to make political points. And that’s not how a commander in chief operates. You don’t turn national security into a political issue, certainly not right when it’s happening.

In his reply Obama focused on goading Romney by accusing him of “trying to make political points” by attempting to “turn national security into a political issue.”  Obama went on to say that the next day in the Rose Garden he called the Benghazi attack “an act of terror,” which he knew would get Romney’s attention.

When Mitt Romney challenged the President’s claim to have admitted that it was an “act of terror” the next day, a relaxed Obama smiled haughtily, balanced himself on his stool and said, “Please proceed…please proceed Governor” as if to say “Go ahead and make a fool of yourself.”

Obama then signaled to Crowley to “Get the transcript.”  Wonder of wonders, Candy just happened to have Obama’s Rose Garden comments right in her hand. Crowley, who obviously didn’t read the transcript, proceeded to agree with Obama by informing Romney that the President did indeed say that it was an “act of terrorism.”   A smirking Obama then delighted the audience when he smarmily yelled out, “Could you say that a little louder” honey, I mean Candy?

Was Mitt set up?  It appears that Obama purposely instigated the Benghazi controversy.  If not, then why would tag team Obama/Crowley just so happen to have the Rose Garden transcript handy?  Obama called for a reading from the record and was supported by the supposedly neutral debate moderator with an interpretational stretch that endeavored to make Mitt Romney look clueless and as if he was trying to score political points.

By the next day, besides admitting she was wrong on the facts, Candy Crowley also revealed that she was wearing a Peter Popoff-style earpiece, which she claimed “played no part in the Benghazi/terror exchange.”

The question is, did Candy Crowley have any other transcripts in her debate brush-up pile?  And if not, why not?

There is no way to know for sure whether the Obama/Crowley crew attempted, albeit poorly, to purposely ensnare Mitt Romney, but based on what happened at Hofstra University, an orchestrated liberal assault is certainly something that doesn’t seem out of the question.