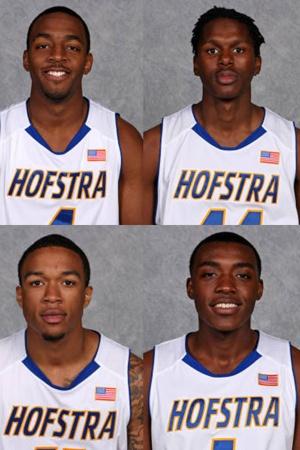 Hofstra University in Hempstead, NY just found out that The Blind Side, an inspiring movie based on true story where a rich woman adopts a poverty-stricken boy and mentors him to NFL success, if put into practice, more often than not delivers disappointing results.

Hofstra University is an elite private academy that charges, give or take, about $200K for four years of college.  Star basketball players Dallas Anglin, Jimmy Hall, Shaquille Stokes, and Kentrell Washington paid nothing to attend Hofstra, because all four were on full athletic scholarship.

The four men’s prowess on the hardwood made them popular on the Hofstra campus.  In turn, the hoopsters used that status to systematically burgle Apple products from classmates to later sell on Craigslist for extra pocket money for things other than textbooks.

The Basketball Bandits had access to dorm rooms, where they executed their schemes.  For example, while Jimmy Hall queried whether a female co-ed would “be down to have some fun with [him] and [his] teammates” by having group sex, Shaquille Stokes was busy stealing her laptop.

The bandits were eventually caught when a female friend of point guard Shaquille Stokes remotely activated her stolen Apple device’s internal locator, which had been re-registered to her buddy.

Presently, the stolen items exceed $10,000.  However, according to Nassau County Police Detective Lieutenant Raymond Coté, the total far exceeds that amount, but the police won’t know for sure until the actual number of victimized students can be ascertained.

Hurley also feels bad for Hofstra basketball coach Mo Cassara for “giving [Hall] a chance and this turning out to be where it is right now.”  Which means that Hofstra, like all the Americans who fund able-bodied individuals enjoying perks they’re ungrateful for, is being majorly played.

Fatherless child Jimmy Hall claims he stole because he was hungry.  Hall told authorities, “I needed some money,” which in share-the-wealth circles justifies robbing even head coach Mo Cassara, who fought for and believed in Hall despite Hall’s questionable record at St. Anthony’s.

Jimmy said he used the cash from the stolen property to “pay his phone bill, buy food and for other expenses.”  Instead of using their spare time for group sex and thievery, to exhibit some gratitude, couldn’t Hofstra basketball jersey #1 and his three accomplices have gotten a part-time job between classes and basketball practice?

After his arrest, Hall, the season’s Hofstra Pride second-leading scorer, even admitted that he and his technologically discriminating buddies were angry after stealing a Sony laptop because “it wasn’t a MacBook.”

According to court records, the repentant freshman also told cops, “I know what I did was wrong and I am very sorry for what I got myself involved with. I am willing to pay back these people for my losses. I will never do this again.”  The question here is: where will Jimmy get money to pay back the people he stole from if he had to steal money from them in the first place?

Anyhow, it was Shaquille Stokes who received a “hardship transfer waiver” from the University of Hawaii, which allowed him to start playing for Hofstra Pride without waiting a year before transferring.

Stokes did have a heartwarming story to tell.  Seems Shaquille received that waiver because Hawaii was too far from Harlem, and he wanted to be closer to his ailing grandmother.  In addition to being closer to Grandma, the waiver ensured that Stokes was able to assist three other “hardship” cases in pawning stolen property to finance Adidas sportswear.

According to court records, none of the defendants had prior criminal records.  However, getting $200K worth of basketball stardom is heady stuff.  Add to that a bunch of “rich kids” with Apple computers living in the dorm alongside you, and it’s only “fair” that if group sex is out of the question, purloining a “piece of [Apple] pie” is certainly justifiable.

It was reported that when arraigned in Nassau County Supreme Court, the men were “sullen.”  Shaquille Stokes’s lawyer, Frank Whelan, appealed to the judge to let the basketball player go on his own recognizance, citing Stokes’s “community ties” and “status as a scholarship athlete.”  The judge rejected the request, and Shaq was ordered held in lieu of $25,000 bail on five counts of felony burglary.  Short-on-Cash Shaquille should be relieved, because in prison food is free, and no one has a cell phone bill.

Dallas Anglin walked free after posting $2,000 bail.  As for the other two, the pressure is off for a spell, because bunking in Nassau County Correctional Center is sort of like having a full college scholarship: room, board, and specialized education are all on the house!

Kentrell Washington’s lawyer vowed that his client “will fight these charges because this will have an effect on [Kentrell’s] scholarship status.”  Apparently, in the world of entitlement, burglary shouldn’t preclude getting more free stuff.

In the end, the lesson to be learned is that there is no surefire recipe to change entitlement junkies into appreciative human beings.

Four ungrateful athletes were given something paid for with other people’s hard-earned money, and for them, it just wasn’t enough.  Or maybe the explanation is that the Basketball Bandits attended the Presidential Debate at Hofstra on October 16th and learned firsthand from Barack Obama that for some people, pilfering your “fair share” is perfectly acceptable behavior.