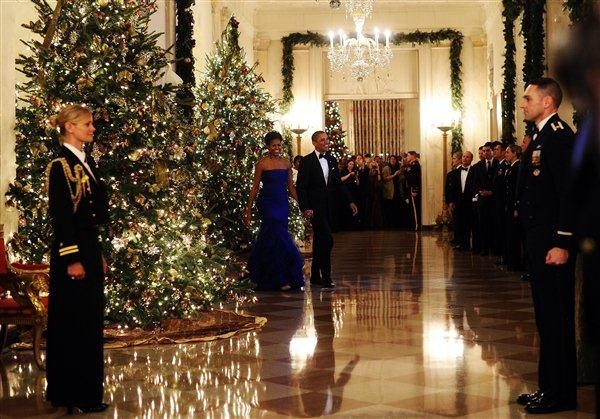 The thing about liberals that never ceases to amaze is how the high standards they espouse never apply to them.  Take the president and first lady for example.  How can you call yourself a green president, allow a group to call themselves “Environmentalists for Obama,” rail on and on about climate change…and then, while planning to be away for 21 days in Hawaii, commission 54 Christmas trees to be displayed in the White House?

In the meantime, America is starring in a breathtaking fiscal cliffhanger.  With that in mind, is it appropriate to waste taxpayer money on the merciless slaying of 54 oxygen-producing trees?  Maybe Mr. and Mrs. Obama should be more like Al Gore; at least Al’s concerned about “rising tree mortality” and habitat destruction.

Way back in 2009, Michelle addressed the Environmental Protection Agency and expressed the following sentiments: “Your work will not only save our planet and clean up our environment; it’s going to transform our economy and create millions of well-paying jobs.”

This year, as unemployment hovers around 8 percent and clearly oblivious to the ecological impropriety of chopping down trees, the first lady told White House visitors, “We have 54 trees in the White House — 54!  That’s a lot of trees.”  Yeah, and in a recession, four million are a lot of dollars to spend on a three-week Christmas vacation that could salary 80 unemployed Americans at $50K for one year.

Debuting White House holiday decorations, Michelle Obama told visitors that “[t]his year’s theme…’Joy to All’…celebrates the many joys of the holiday seasons: the joy of giving and service to others; the joy of sharing our blessings with one another; and, of course, the joy of welcoming our friends and families as guests into our homes over these next several weeks.”

Nonetheless, if it’s true that “[a]n average size tree produces enough oxygen in one year to keep a family of four breathing,” from an “Environmentalists for Obama” point of view, wouldn’t it be better to keep 216 people oxygenated and skip the 54 trees?

And what about the Obama family dog?  Thanks to the indoor thicket of evergreens, poor Bo is now burdened with the undue stress of having to resist using the tree exhibition for purposes other than barking at “Bo-flake” ornaments.

Even still, as a rule, Barack Obama does advocate for decreasing CO2 emissions.  Yet, based on the tree extravaganza, it seems as though the climate change-conscious Obamas are unaware that cutting down foliage contributes to larger concentrations of carbon dioxide in the air.

Thus far, “Environmentalists for Obama” have not made a public statement about what they would normally consider an ecological and environmentally irresponsible decision to cut down 54 full-sized evergreens, including the 18-foot-6-inch Fraser Fir, brought in on horse-drawn carriage, currently on display in the White House Blue Room.

Typical environmentalist hypocrisy aside, this Christmas, Americans can all breathe easier knowing that the real reason most people are suffocating has nothing to do with air quality, or even White House-sponsored deforestation.  Instead, this holiday season, America’s asphyxia is due to Barack Obama’s policies sucking the oxygen out of every corner of the political, social, and economic atmosphere.