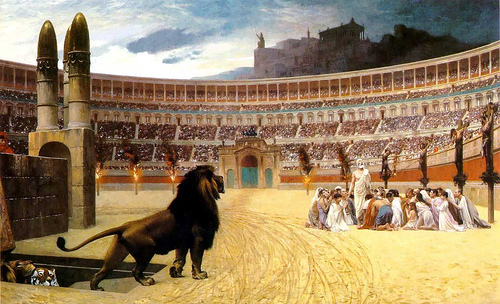 The New Year has started well for Barack Obama. The president took a step forward in the ongoing process of “fundamentally transforming” America. As 2013 dawned, Obama accomplished a formidable set of goals: higher taxes for the majority, class warfare further exacerbated, and a public lashing of the prosperous for being prosperous.

Along with Obama’s victories, what was also revealed was how a wily leader could turn neighbor against neighbor, American against American.

On New Year’s Eve, Mr. Obama addressed the nation from the Eisenhower Executive Office Building, complete with a cheering section made up of middle-class supporters. The meeting was a rally/gloating session for a man clearly pleased that he had successfully forced his political adversaries to compromise on raising taxes. As an added bonus, at the event Obama managed to further malign the affluent.

Barack ‘Braggadocio’ Obama pointed out that the “fiscal cliff” crisis placed him on the brink of a huge political victory by forcing the GOP against their will to accept higher tax rates for the wealthiest Americans. Reveling in his conquest, the president pointed out to spectators that “Just last month, Republicans in Congress said they would never agree to raise rates.”

Well, that was then and this is now. Once again, by nurturing a Cloward-Piven-style crisis Obama managed to push the Republicans so close to the edge of the economic precipice that they were willing to agree to raise taxes to avoid being shoved into the abyss.

With a crisis-fueled wind at his back, Obama may as well have smirked and blurted that nasally third-grade favorite: “Na-nana-naa-nah.” Judging from the crowd he was charming, it would have gotten him a standing ovation.

Senator Dan Coats (R-Indiana) commented that Obama’s childish conduct reminded him of “of football players taunting their opponents.” Coats said, “It [was] in-your-face. It was demeaning. It was insulting. It was sad.”

Yet, despite the immature nature of the whole event, what was appalling was not so much Barack Obama’s predictable approach or his orchestrating what John McCain called “a cheerleading rally,” but the willingness of the audience to cheer when the President announced that the rich would be shouldering more of the nation’s tax burden.

For four years, Barack Obama has worked diligently to disparage success. He has insidiously cultivated class envy and fueled it with ignorance using the false premise that the wealthy destroyed the nation and are deserving of monetary castigation.

Clearly, Mr. Obama’s persistence has worked, because the type of wicked satisfaction displayed in response to a sophomoric president boasting that the rich would be overtaxed reeked of a mob mentality reminiscent of a coliseum full of bloodthirsty spectators.

Americans applauding the fact that other Americans are to be punished by a leader for fabricated offenses helps one understand atrocities like the Romans cheering while their Christian neighbors were thrown to the lions merely for being Christian.

It was a well known fact that Lucius Domitius Ahenobarbus, also known as the Roman Emperor Nero, considered Rome “ugly and squalid.” In A.D. 64 there was a devastating fire that nearly destroyed Rome. As a result, rumors circulated that the emperor started the fire so that he could, for all intents and purposes, “fundamentally transform” the city into Neropolis.

Nero purposely starting a fire to create a crisis in order to bypass a disagreeable Senate and make Romans more amenable to his rebuilding the city is merely an ancient version of basic Cloward-Piven strategy. With Nero’s rule in jeopardy, and G.W. Bush’s birth not due for another 2000 years or so, the evil emperor needed someone to blame for the destruction. Nero chose Christians who were already believed by the Romans to be “antisocial, unpatriotic and uncooperative.” And the commoners bought it.

Antiquity tells us that:

To stop the rumor [that he had set Rome on fire], he [Emperor Nero] falsely charged with guilt, and punished with the most fearful tortures, the persons commonly called Christians, who were [generally] hated for their enormities. Accordingly first those were arrested who confessed they were Christians; next on their information, a vast multitude were convicted, not so much on the charge of burning the city, as of ‘hating the human race.’

To convince the Romans that Christians were guilty, Nero persuaded the Romans that this obscure sect, much like modern-day rich people, “hat[ed] the human race.” And so, with the public’s approval, Nero fed the innocent to wild beasts, and had others “burned alive as living torches to light garden [parties] at his Golden House.”

Nero was so skilled at art of persuasion that slaying Christians for sport was cheered in a manner eerily similar to the way Obama’s New Year’s Eve supporters cheered taxing the prosperous.

According to Roman historian Tacitus, eventually Christian persecution became so brutal that “[a] feeling of compassion arose towards the sufferers.” Finally, astute Romans realized that Christians were “not [being] cut off for the public good, but were victims of the ferocity of one man.”

Fast-forwarding 2000 years, although the “wealthiest among us” are not being literally crucified, a leader who is purposely burning the country down in order to rebuild it his way is unfairly punishing the innocent. In the process, he’s managed to sway the envious that the wealthy aredeserving of being monetarily penalized.

On New Year’s Eve Obama wallowed in the fact that the burden for a fiscal fire he exacerbated would be officially laid on the backs of those he clearly loathes. Moreover, he did nothing to dissuade his audience from cheering the news that the well off would be thrown to the tax lions.

Therefore, Emperor Barack Obama passing the blame and admonishing the guiltless certainly smacks of ancient tyranny. Nonetheless, let’s hope that eventually ‘civilized’ people will stop applauding long enough to recognize that well-to-do Americans are “not [being] cut off for the public good,” but are modern day “victims of the ferocity of one man.”