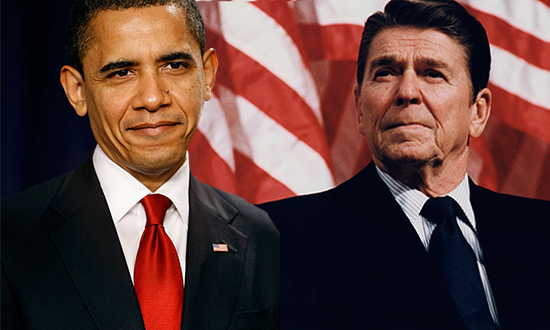 In 1970, Joni Mitchell’s song Big Yellow Taxi was a huge hit. Forty-two years later, it is rumored that the University of Chicago wants to raze Ronald Reagan’s childhood home to clear the way for Obama’s future presidential library, which brings to mind the lyrics “[t]hey paved paradise and put up a parking lot.”

Although Chicago isn’t planning on putting up a “pink hotel, a boutique and a swinging hot spot,” they might as well be. Why? Because next to Ronald Reagan’s quality of character, political philosophy, and love for America, Barack Obama is a chintzy imitation.

The controversy over the location of the future archive started when Michelle Obama’s former employer, the University of Chicago Medical Center, disclosed potential plans to turn Ronald Reagan’s childhood home in Chicago into a parking lot for President Barack Obama’s Presidential Library.  That was when it became clear that liberals will not rest until every vestige of conservatism is purged both figuratively and literally from the national consciousness and progressivism is all that remains.

By honoring Obama at Reagan’s expense, the President and his minions would be acting just like the victorious Islamic conquerors who once built mosques over sacred sites.  Think about it – as liberals endeavor to subjugate conservatism, what better way to send a message of conquest than erecting a monument to Obama over the boyhood home of Ronald Reagan?

Chicago was chosen over Honolulu, Hawaii as the site for the library, which it is estimated may end up costing more than $500 million before it’s complete.  The Hyde Park district, home of Obama prior to moving to Washington D.C., and now the site for his presidential library, is but a stone’s throw away from where Obama began his sharpening his community-organizing skills.

Not only that, but besides starting his political career in Chicago, the President also attended Jeremiah Wright’s anti-Semitic church in Chicago, hung around with Weather Underground terrorists Bill Ayers and Bernadine Dohrn in Chicago, and taught constitutional law at the University of Chicago – a subject he has proven to be vastly unqualified to teach.

Nevertheless, in anticipation of Barack Obama’s reelection, the Commission on Chicago Landmarks denied Reagan’s boyhood home landmark status in 2012 because it was deemed “not architecturally significant and the nation’s 40th president did nothing notable while living there.”

Sorry, but someone should inform the Commission on Chicago Landmarks that whatever Ronald Reagan did at four years of age is likely a lot more notable than anything 50-year-old Barack Obama has done as the 44th president.

But the worst of it isn’t so much talk of Reagan’s home being torn down to make way for Obama’s library. What is unconscionable is the plan to pave over the place where little Ronnie lived and played.  Furthermore, placing a “Historic Landmark” plaque in a parking lot demeans the memory of a great president and sends a message to America that accommodating school buses takes precedence over preserving a valued piece of history.

Moreover, leveling a historic site connected to America’s most beloved conservative icon would send a strong message of triumph for Progressivism and indicate a disrespectful dismissal of Conservatism.  But then again, Obama’s dog-eat-dog Chicago attitude may be why the dog-eating President would allow his surrogates to assist him in using Reagan’s former home as a fire hydrant that he can lift his leg on to send a message to Traditional America.

Four years ago, Chicago came to Washington D.C. and with it came Al Capone-style politics – political elitism, a persistent watering-down of the U.S. Constitution, deprivation of religious liberty, endorsement of collectivism in place of individualism, scorn for success, antipathy toward the military, and an elevation of government to a position of all-encompassing authority and provider.  All those things, and more, are the antithesis of everything President Ronald Wilson Reagan stood for.

So, as time marches on it seems inevitable that the memory of Ronald Reagan’s inspiring words are sure to be drowned out by the sound of bulldozers, wrecking balls, and jackhammers as the future/final home of Barack Obama’s Teleprompter is constructed. Meanwhile, for Baby Boomers who understand the travesty of liberals destroying history in order to manipulate it, the lyrics “Don’t it always seem to go, that you don’t know what you’ve got ’til it’s gone,” have taken on a whole new meaning.