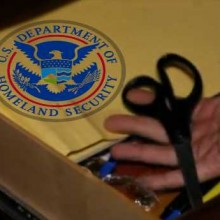 Last year, with the authorization of Attorney General Eric Holder and the U.S. Department of Justice, after thousands of “Fast and Furious” assault rifles wreaked mayhem on both the U.S. border and inside Mexico, the Obama administration commissioned Janet ‘Big Sis’ Napolitano to do whatever was necessary to help save American lives.

Soon thereafter, U.S. Customs and Border Protection, overseen by Secretary Napolitano and the Department of Homeland Security, seized 13,000 “unsafe hair dryers” from blowing their way across the border.

Apparently, Mexican drug cartels entering the U.S. to buy illegal guns and Al Qaeda operatives infiltrating American soil are not the problem.  But hairdryers that “fail to have adequate immersion protection” — now that is a huge problem.

Fully aware that nervous citizens were grappling with hairdryer immersion concerns, the DHS reassured the public that “The potentially dangerous hair dryers were identified through a nationwide targeting operation by the U.S. Customs and Border Protection Import Safety Commercial Targeting and Analysis Center (CTAC).”

Well-coifed Americans breathed a collective sigh of relief. Thankfully, the government made sure that if one should decide to dry their hair in the bathtub, thanks to the efforts of attentive border agents there’s a good chance they won’t be electrocuted.

Now, a year later, after pulling the plug on a successful “dangerous hairdryer” crusade, Ms. Napolitano and company have embarked on a new venture: offering advice on how to stay alive if one is fortunate enough to have a job and a demented gunslinger decides to vent his anger in the workplace.

In an effort to save lives, the Department of Homeland Security, an agency that still hasn’t confiscated all the guns that were purposely walked across the border into Mexico, posted a government-produced video entitled “Options for Consideration Active Shooter Training Video.”

Excuse me, but that title just cries out for a DHS-style acronym, and is almost as ridiculous as the infamous DHS “man caused disaster” definition that the organization came up with for terrorism.

When overseeing the content of the video, Big Sis must have felt it was necessary for the narrator to explain to grown adults that an “active shooter is an individual actively engaged in killing or attempting to kill people inside an occupied structure or outside in a populated area.”  What Janet forgot to mention was that “active shooters” attempt to kill people with guns.

Naturally, because the government objects to honest Americans citizens being armed and able to defend themselves, the DHS was forced to get creative when suggesting lifesaving options that should have also included: When making a business call, instead of looking for the donuts and coffee or scoping out the location of the bathroom, be on the lookout for an escape route and never sit with your back to the door.

On behalf of Barack Obama’s December 2012 “Critical Infrastructure Protection and Resilience” initiative, the deliberate tone of the narrator also suggests intuitive things like scurrying under a desk or conference room table; shutting off lights; closing blinds; trying not to sneeze or cough; and cell phone deactivation. The video also suggests locking and/or barricading oneself in an office; running for the stairwell; stepping over dead coworkers; and putting your hands in the air with fingers spread apart while passing the SWAT team on the way out of the building under siege.

According to the video, for lack of a legal firearm or a place to hide, victims have a better chance of survival if they attempt to “overpower the shooter with whatever means are available.”

DHS forgot to mention that Office Retaliation Options, or OROs, could also include even more creative defensive measures such as: Jamming chewing gum into the barrel of the gun; stapling the shooter’s feet to the floor; bludgeoning the aggressor with a fire extinguisher; asphyxiating the assailant with a baseball-size wad of Post-Its; using a letter opener as a stabbing implement; or better yet, slicing an assailant to ribbons with the pair of scissors depicted in the video being pulled from a disorganized desk drawer by a quick-thinking office worker under fire.

A word of caution for jujutsu experts defending themselves for the first time with office-supply-quality cutting shears: Just make sure the blades are not in the gunman’s jugular with your hand still on the handles.  Why? Because the video advises that when the cops arrive those wielding sharp objects must “Put down any items [and] immediately raise [their] hands,” lest they survive the gunman but lose their lives to an overenthusiastic first responder.

In the end, between Ms. Napolitano’s successful “dangerous hairdryer” endeavor last year and the lifesaving instructions for using scissors against an angry, gun-wielding former coworker on a rampage this year, the Department of Homeland Security’s information campaign is destined to save lives.

In the meantime, in the near future a taxpayer-funded “Options for Consideration Active Shooter Training Video Part. II” may be warranted to address a situation where a gunman attacks, oh, let’s say a beauty parlor. In that case, someone will need to provide step-by-step self-defense “options” for a hair stylist with only a “dangerous hairdryer” handy and no assault scissors within reach.