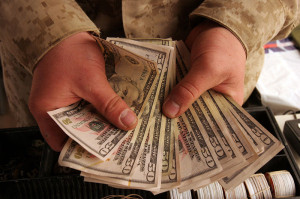 Now, after piling on a debt of $53,377 per household, the person who accrued that debt has proclaimed tax month to be “National Financial Capability Month.” No offense to the president, but the only capability he has exhibited in the last four years is the capability to financially obliterate the nation’s entire economy. Obama giving financial advice is kind of like Obama giving basketball tips – regardless of what he thinks; it’s just not a part of his skill set.

It’s the liberal way to perceive yourself as diametrically opposed to what and who you actually are. Therefore, Barack Obama being a financially incapable liberal is precisely the reason why the man who has yet to submit a budget proposal for 2014 feels he’s qualified to teach young people “how to budget responsibly.”

What’s next, Bill and Hillary Clinton running a Marital Cohesiveness and Fidelity Seminar? How about first daughters Sasha and Malia, who took not one but two spring break vacations, sharing with the younger set how to spend a week at the Atlantis in the Bahamas and River Run in Sun Valley, Idaho on a limited budget? Sorry, but if Barack Obama is financially capable, then outgoing MSNBC host Ed Schultz is qualified to host a new “Eradicate Bias in the Media” show.

Wait! When Obama says “all Americans” does “all” include himself and the $10 million dollar vacationer he’s married to, or does “all” just mean everybody except Mr. and Mrs. Obama?

Either way, the president must truly believe that he’s an authority on stretching a dollar, because in his “National Financial Capability Month” proclamation, he said that his “[a]dministration is dedicated to helping people make sound decisions in the marketplace.” That marketplace, by the way, is the same marketplace that he’s currently in the process of destroying. It could be that President Obama thinks that the soundest way to save money in the marketplace is to exchange the marketplace for something altogether different.

Well, at least Obama is voluntarily giving the middle class pointers on how to subsist with less money, especially after the 2% payroll tax increase the president promised the middle class they would not get was folded into the fiscal cliff deal in the form of increased social security withholding.

As for budgeting, the president’s record speaks for itself. In 2009 the self-perceived financially capable Obama’s budget goal was to cut the $1.2 trillion deficit in half. Three years later, the president “averaged a record $1.3 trillion deficit over the first term.” Mr. Obama promised a $600 billion cut in deficit spending and ended up with a $1.3 trillion shortfall. That, my friends, shouts financial incapability.

Remember the “stimulus?” Who else do you know could add $812 billion to the deficit in an effort to stimulate the job market, promise that those dollars would help unemployment drop below 6%, only to see it rise all the way up to 9% at one point? Then, when frustrated workers who’ve been unemployed for four years give up looking for work and the rate misleadingly drops to 7.7%, Obama calls it an improvement.

About budgetary concerns down the road, Barack Obama told the public that the 10-year cost of the Affordable Care Act would be $900 billion; the actual cost will be $2.7 trillion. In the president’s defense, when budgeting, a $1.7 trillion miscalculation here or there should not cause a person to lose credibility in the area of budgetary expertise.

When Barack Obama took office in 2009, he predicted that by the end of his first term the GDP would be 4.6%. Through the third quarter of 2012 the GDP was 1.7%; the second-quarter percent change guesstimate is 1.3%, which reflects a “downward revision” of 0.4%. Now that right there is a level of financial savvy that is nothing short of astounding.

For “National Financial Capability Month,” Barack Obama declared, “My Administration continues to encourage responsibility at all levels of our financial system by cracking down on deceptive practices and ensuring that consumers are informed of their rights.” Talk about a total lack of self-awareness. All this “cracking down” is coming from the irresponsible Obama administration, with its deceptive practices and continual infringement on everybody else’s rights.

Barack Obama has burdened our young people with an unfathomable debt he refuses to fix and now he’s offering them help for the mess he’s gotten them into? Obama said, “Together, we can prepare young people to tackle financial challenges – from learning how to budget responsibly to saving for college, starting a business, or opening a retirement account.”

President Obama will never admit it, but “National Financial Capability Month” is really just about tax month and training Americans to make do with a whole lot less than they’re used to.

Better advice would be for young people to forget about “saving for college, starting a business, or opening a retirement account.” Instead, what young people need to do is realistically prepare themselves for a lifetime of hardship as they shoulder the financial burden that the financially incapable Barack Obama has heaped upon their shoulders.