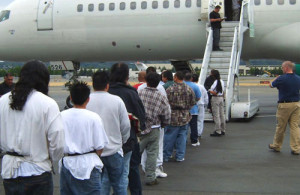 While Democrats are busy romanticizing illegal immigration and portraying sneaking over the border to be some kind of heroic act, the American culture and economy continue to suffer – not to mention the health of the American people being jeopardized by gatecrashers infected with dangerous diseases like antibiotic-resistant TB.

For some reason Democrats, whose voter base consists of those dependent on the system, apparently don’t recognize the dichotomy of citing work ethic and familial solidarity as reasons illegals benefit America.  The left is clearly not sharp enough to realize how promoting amnesty by touting hardworking, family-oriented illegals undercuts the effort to cultivate a one-parent family/welfare mentality power base.

For years the American electorate has had the lie pounded into their heads that rounding up and deporting illegals would be an impossible feat. Yet, Democrats in the Senate voted 43-56 against a proposed bill that would prevent border crashers from getting free health insurance if amnesty becomes a reality.  It would seem finding illegals is feasible if doing so furthers Democrat policy goals.

The number of immigrants living in the US illegally is believed by some experts to be a conservative 11 million, which raises another question: If counting illegal aliens is possible, how come catching them is not?

The answer matters little because the number is likely closer to 30 million.  And every day, about 3 thousand more stream through airports and overstay their visas, while others are brazen enough to slink over 18-foot fences in plain sight of four US senators touring the border.

Once here, if apprehended and a judge decides not to deport them, illegals instantly become eligible for all kinds of public assistance.  In other words, these individuals who are supposedly impossible to catch, if they should happen to be caught, instead of being sent home are allowed to stay and become a financial liability to a nation already overburdened with crushing debt.

Thus, the question that should be asked is this: Do Democrats really expect Americans to believe that undocumented people are impossible to find? Don’t the children of illegals overcrowd our classrooms?  Don’t you need a utility bill to register a child in public school? And again, isn’t the left hoping to offer illegals free healthcare?  If so, how will those hiding in the shadows receive a free Medicaid-style insurance card if they can’t be located?

Read the remainder of the article at The Blacksphere