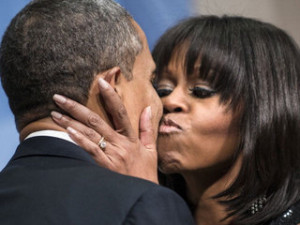 If anyone was wondering of late why Michelle has been sporting a youthful set of bangs, vacationing by herself, dancing to “All the Single Ladies” with Jimmy Fallon, or using exercise as an excuse to practice pole dancing moves, the truth may finally be out.

Seems Barry and Shelly may have gone the way of that other blissfully happy political power couple, Hill and Bill.

Recently, during an interview with a CBS affiliate in Vermont, Mrs. Obama, referring to herself, said, “Believe me, as a busy single mother — or, I shouldn’t say, ‘single.’ As a busy mother.”

Oops! Doesn’t a smart woman like Michelle realize that there is a big difference between “single” and “busy?”  Guess she does, because the first lady quickly corrected her Freudian slip by saying, “Sometimes when you’ve got the husband who’s president, it can feel a little single, but he’s there.”

Either way, despite the peculiar blunder, the first lady did get the “mother” part correct.  She also got the “busy” part right, because if there’s one thing that’s true, Ms. Michelle Robinson-Obama is one busy-body-mother.  As for the “single” part, was that a slip of the tongue, wishful thinking, a throwback to 2000 when she allegedly threatened to divorce her loser husband, or did she accidentally blurt out factual, top-secret information?