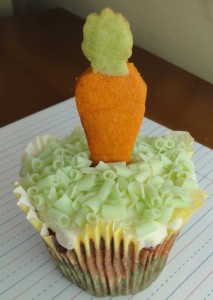 There’s just no stopping Mama Obama.  The first lady has successfully wangled her way into school cafeterias, but that wasn’t enough.  Now she’s praising textbook publishers for “swapping out cupcakes for apples in math problems.”

According to the “Let’s Move!” blog entitled “Cookies 2 Carrots,” the White House “celebrated a group of educational publishers on their development of voluntary guidance to incorporate health information into textbooks and other learning materials.”

Who would have thought that the positive impact of portraying Christopher Columbus as an ambassador of atrocities against indigenous peoples could be upstaged by eliminating cupcakes? Thus, in the American public school system, carrots, LGBT sensitivity, free birth control, and Obama chants are in, while cupcakes, couch potatoes, prayer, and patriotism are out.

The “Cookies 2 Carrots” initiative blog post praised a group of educational publishing companies, saying, “Just as these publishing companies came together thirty years ago to incorporate greater diversity into textbooks, they are now using their platform to have a positive impact on children’s health. We congratulate them on their exciting leadership.”

That’s why, according to “Let’s Move!” by making simple changes like swapping out baked goods for apples in math problems, educational book publishers can join the nationwide push to do away with muffin tops

Which raises the question:  Has anti-cupcake advocate Michelle Obama repented since allowing NYC’s Magnolia Bakery to shut down the cupcakery while she, Grandma Marion, Malia, and Sasha loaded up on confectionary creations during their whirlwind New York City Tasting Tour in 2010?

Regardless of the answer to that question, “Let’s Move!” Michelle is still of the belief that if images of fruit replace  sweets in school textbooks, children will be subliminally programmed to rush home and gorge themselves on fresh produce.

In addition to pictorial changes, according to the “Let’s Move!” blog, textbook publishers are also finding creative ways to “include physical activity in lesson plans,” such as “discussing the history of little league baseball and using sports in word problems.

Oh no! Didn’t political science professor William Thomas once comment on Barack Obama’s poor Fantasy Football skills?  Wasn’t it the good professor who aptly observed: “How can he lead this country if he can’t even make a proper draft pick?” Therefore, if the goal of education is really to plan for the future by preparing well qualified leaders, let’s not make the mistake of including lesson plans that keep score Fantasy Football-style.

Either way, in the area of  including “Let’s Move!”-friendly math equations, there has been ongoing progress.  However, since some educators insist on developing children’s interest in arithmetic by using gumdrops and jelly beans, in the future, additional outside intervention will still be required.

In the meantime, Mrs. Obama’s initiative has expanded the long arm of government reach to include museums and zoos. Henceforth, Americans should not be surprised if in the near future the ‘Please Don’t Feed’ sign at the zoo includes a list of what the kids can’t eat, not what the zoo visitors are prohibited from tossing into the gorilla cage.

Not only that, but friendly intrusiveness will not be restricted to educational venues alone because Mrs. Obama has announced her second term plans to infiltrate the “sugar, fat and salt” on supermarket shelves and “women’s health issues” too!

As an added bonus, Mrs. Obama is plotting to incrementally strive toward seizing the authority to choose what women eat and what their children — if they choose not to abort them — eat. In other words, according to the first lady, when given a choice, a lot of people make the wrong choice.

Therefore, while the “rights and options” remain sacrosanct for non-food related issues, when it comes to the choice between counting or eating carrots and cupcakes, Michelle Obama wants to do the choosing.