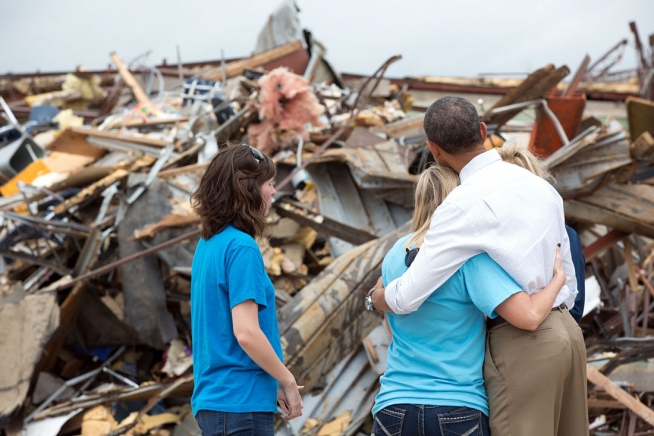 Barack Obama loves to throw around Scripture and pepper prayer breakfasts, memorials, school shootings and Democrat conventions with out-of-context Bible verses. Apparently the president, who is able to compartmentalize actions and separate them from contradictory statements, doesn’t think America notices that a man who approves of the unencumbered slaughter of the unborn, partially-born, and even the just-born perceives himself to be some sort of virtuous Biblical king.

Not only that, but when he’s not citing Scripture, depending on the venue Obama has also been known to cover up crucifixes and lie so blatantly that he puts Liar Liar Jim Carrey to shame. For starters, think Fast and Furious, Benghazi, IRS, and the AP.

So, to see Obama in his faux preacher attire and hear him quote Scripture he doesn’t believe, let alone adhere to, certainly should qualify as blasphemy.

Six days after a devastating EF-5 tornado that killed two dozen people as it virtually leveled Moore, Oklahoma with winds in excess of 200 mph, President Obama, still avoiding questions about the four Americans who returned from Benghazi in coffins, showed up in the “Sooner State”.

Ravaged by his own whirlwind of scandals, President Obama claimed he traveled to “Monroe”…oops, that’s Moore, as a lowly representative of the American people.

Just for context, it’s doubtful that when pledging federal support for “the reddest of the red states” the thinnest of thin-skinned presidents forgot that he lost the 2012 Democrat Primary in 15 Oklahoma Counties. But he gritted his teeth and flew in anyway, and while he was at it he milked a photo op and quoted some out-of-context Scripture.

When Jesus issued the Great Commission commanding His followers to go and preach the Gospel in every corner of the earth, in summation, this is what He said: “And surely I am with you always, to the very end of the age.”

With the rubble of the carefully chosen elementary school where seven children drowned as a backdrop, after passing out awkward hugs and flanked on either side by Governor Mary Fallin and Moore’s mayor Glenn Lewis, Obama referred to himself as “a messenger,” sent to let “everybody know that [they] are not alone.”

Funny, that was a message Ambassador Christopher Stevens never got in Benghazi the night he was left alone to be tortured and killed after begging for help that never came.

Then, waxing pseudo-spiritual, Obama shared a story about a Bible that was found in the rubble of a tornado that tore through Oklahoma on another day. Meanwhile the real miracle, the one that pro-choice Barack Obama would never acknowledge as a message from God, involved a purposely-flushed baby boy who was fished out of drainpipe alive in China.

Nevertheless, the president painted a rhetorical word picture replete with images of a gentle breeze softly blowing open the pages to a specific verse in the Old Testament Book of Isaiah, chapter 32:2.

Obama then quoted the prophecy about a righteous king whom Isaiah said “shall be as a hiding place from the wind, and a covert from the tempest.” No one really knows whom Obama was alluding to exactly, but with the tornadic conditions swirling about and his promise to provide federal assistance, it’s easy to guess.

So the real message in Moore was this: Although the Americans in Benghazi were alone, Oklahomans are not alone. There’s a man who claims to be like a hiding place from tornadoes who just so happens to be the same man who was in hiding himself the night Christopher Stevens was being sodomized and left to die.

Somehow, considering those facts as well as others, hearing Barack Obama say that “God has a plan, but we are instruments of God’s will” seemed a smidgeon disingenuous coming from someone whose instrumentation was offline on September 11, 2012.

Nonetheless, while the president seemed to be personally identifying with Bible verses, what he should have done was continue to read, because the passages that followed accurately described his ineffectual leadership and the godlessness he condones – not only with the policies he furthers and supports, but also with his use of non-existent Biblical faith for political expediency.

If that Bible was really salvaged from the rubble the Scripture that Obama should have read but conveniently omitted include the following verses:

No longer will the fool be called noble nor the scoundrel be highly respected. For fools speak folly, their hearts are bent on evil: They practice ungodliness and spread error concerning the Lord …Scoundrels use wicked methods, they make up evil schemes to destroy the poor with lies.

So, regardless of how many cherry-picked Scriptures Barack Obama chooses to read and regardless of how deluded he is about who he really is, in the end, when the extent of Obama’s evil folly is finally exposed, “[n]o longer will the fool be called noble nor the scoundrel be highly respected” in Moore, Oklahoma, Monroe, Connecticut, or anywhere else.