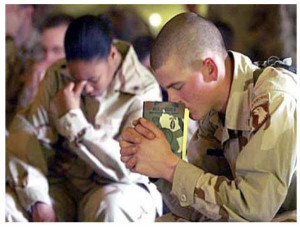 Originally posted on The Blacksphere

The Obama Administration said that it “strongly objects” to a proposed amendment to the National Defense Authorization Act, which was drafted in response to evangelical Christian service members facing growing opposition and discrimination.

After an Air Force officer was instructed to remove a Bible from his desk lest it give the impression that he was sanctioning one particular religion, the National Defense Authorization Act was drafted to attempt to protect the religious liberties of soldiers.

Authored by Congressman John Fleming (R-La) the amendment “required the Armed Forces to accommodate ‘actions and speech’ reflecting the conscience, moral principles or religious beliefs of the members.”

The Obama Administration’s reaction to the proposal was that allowing soldiers to verbalize their religious and moral convictions would have a “significant adverse effect on good order, discipline, morale, and mission accomplishment.”

Apparently, Barack and Company agrees that Christian soldiers should be admonished for sharing their faith or – OMG, worse yet – reading a Bible or leaving it out in plain sight.

However, diversity remains a high priority for the president – discriminatory diversity, that is.

Therefore, sharing your sexuality, especially if you’re homosexual, is perfectly acceptable.  After all, it was Barack Obama who pompously lifted “Don’t Ask Don’t Tell,” and allowed gays in the military to ask and tell.

Hence, if you are gay and in the military, the president supports both your asking and telling, and if the mood should strike, even…oh, never mind.

On the other hand, if you’re a heterosexual, or worse, a heterosexual Christian, according to the DADT President, asking and telling anything about your faith is strictly prohibited because of the “significant adverse effect” the truth of God’s Word may have on fellow soldiers, especially the asking-and-telling soldiers.

But if you’re Muslim and want to wear your prayer cap on base, Obama is perfectly fine with that.  Repeat after me:  Kufi – good; Bible – bad.

If you support Obama, you’re welcome to share your politics; but if you’re a conservative tea party supporter, pro-Israel, or a pro-lifer, the president will find a way to shut you up and shut you down.

So there you have it.  America’s ‘Christian,’ Scripture quoting, once-a-year church-attending, pro-choice, crucifix-covering president wants God out of the military – but only if He’s Jesus, the Son of the God of Abraham, Isaac, and Jacob.  If he’s the gay God, or the Allah God, or best of all the Obama God – feel free to proudly share your faith.