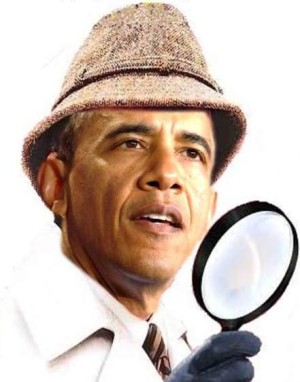 Now, four years later, 194,000 decided to stay home and only 6,000 invited guests attended the President’s one-up on Ronald Reagan with an ‘Eliminate America’s Nuclear Arsenal Speech’ at the Brandenburg Gate.

According to Ralf Fücks of the Heinrich Böll Foundation (you can’t make this stuff up), a nonprofit political organization in Berlin, the German people have endured “a brutal sobering up” and are no longer all that impressed with the guy being chauffeured around in “The Beast.”

As a matter of fact, a group of protests directed at the NSA surveillance of foreign communications took place and drew in about four dozen people who greeted Mr. “Yes we can” with posters that read, “Yes, we scan!”

That’s why Barack Obama, the guy who isn’t all that concerned about anyone’s life unless it benefits him politically, is attempting to reassure German Chancellor Angela Merkel that U.S. Internet and phone surveillance programs are needed to save lives.

Obama has proof! No, not in Boston or Ft. Hood, but somewhere or other, thanks to relentless Inspector Barack Clouseau’s efforts, “Lives have been saved.”

Yeah, butt, er, I mean but, colonoscopies save lives too. So does that mean that once Obamacare kicks in, when Americans least expect it, in the name of saving lives, mandatory, non-consensual colonoscopies will also be administered? How about a few unsolicited Heimlich Maneuvers, just in case?

After expressing astonishment at the huge scope of the Obama Administration’s spying operation, Merkel said the U.S. needs to make clear what sort of intelligence is being gathered and who is being monitored.

Sorry, but if “intelligence” is what Merkel is looking for, she’s looking in the wrong place. The Obama Administration shadowing phone calls and Facebook profile pages while refusing to close our porous border is neither intelligent, nor will it curtail the threat of terrorism.

Tempering her mistrust, Ms. Merkel reiterated that intelligence is key to hindering terrorist plots, and agreed that Germany is “dependent” on unintelligent Americans to spy on people who’ve done nothing other than disagree with Barack Obama.

Further calming Ms. Merkel’s fears, President Obama explained that in order to ensure that any violation of privacy is strictly limited, the program that has been thoroughly overseen by the courts basically consists of the Department of Justice limiting its surveillance to Fox News reporters and tea party groups.