Okay, call me a skeptical, cynical, conspiracy theorist if you must, but these two letters were supposedly from two 9-year-old girls who both wrote unsolicited correspondence to the president in support of his anti-gun and then anti-gun, pro-public education, pro-gay marriage agenda. 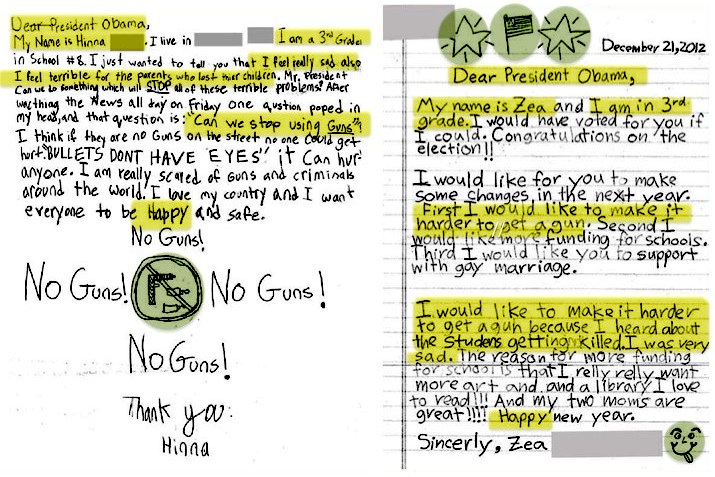 in response to her letter, Hinna Zeejah of Oceanside, NY was one of four ‘kid props’ invited last January to provide a backdrop to the president’s signing of 23 executive orders to tighten gun control.

Then, Zea the letter writer and her twin sister Luna, daughters of two mommies, flew in from Humboldt, California to introduce and help Mr. Obama kick off LGBT Pride month with a reception at the White House.

Now about the letters!

Aside from the liberal use of exclamation points and artistic embellishment in both, the similarities between the two are almost uncanny.

The introductions are virtually identical: both girls are “sad” about gun violence (how convenient), both mention dead students, and both third graders are for gun ownership limitations.  And then coincidentally, both Zea and Hinna both sign off with “Happy” vibes and a cartoonish closing.

Now not for nothing, but the whole letter writing campaign seems a bit fishy.  Two third grade girls write similar letters, with comparable penmanship, artwork included, get invited to the White House to high-five Barack Obama as he systematically dismantles the American Constitution?

Now either, Hinna and Zea collaborated, some White House goon did a little cross-country coaching, or Barack Obama’s penmanship and artistic abilities have vastly improved between January and June.