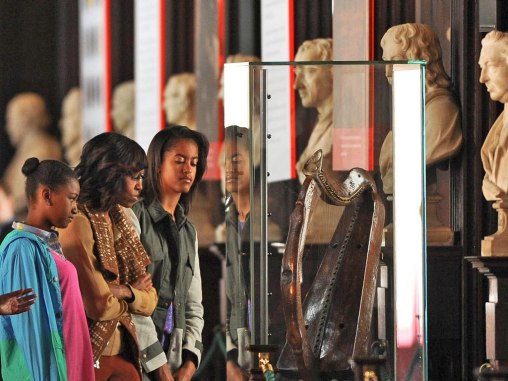 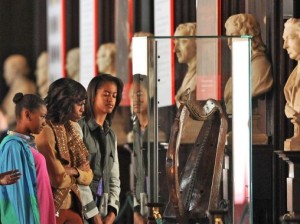 Barry and Shelley, accompanied by colleens Malia and Sasha, have landed in Belfast.  While Dad “faces off” with Vladimir Putin over Syria at the G8 Summit in Enniskillen, Northern Ireland, the wife and kids flew south to visit Dublin’s Trinity College in hopes of learning all about Dad’s Irish roots.

Excited to find out that her daughters are related to white men of European descent, Michelle and the girls perused the Irish ancestors’ birth registry and looked at maps detailing Moneygall’s favorite son Barry O’Bama’s family homestead in Co Offaly.  The Obama girls also saw a 19th century map that is archived in the National Library of Ireland, which shows the lands of Gorthgreen, from where some of Obama’s family hails.

Another highlight of the trip was meeting distant cousin Henry Healy, who bestowed upon Sasha and Malia certificates confirming their Irish heritage.  According to Mr. Healy, “Both [girls] were pretty amazed with the certificates. And competing with their friends, they said now they can prove they’re more Irish than them.”

Mr. Healy said Sasha and Malia were impressed when he presented the first lady with plans for an “Obama Park in Co Offaly.” According to Cousin Henry, the girls said, “Oh my God mum, I can’t believe they’re going to build a statue of you.”  If Co Offaly knows what’s good for them they had better consult with the Photoshop department at Vogue Magazine before starting the statue.

But what’s even more amazing than a bronze effigy of Michelle Obama being erected in a Moneygall park is the amount of money this gal is costing taxpayers on her Mommy-and-Me junket to Obama’s ancestral home.

The cost of thumbing through the 9th century Monk-inscribed Gospel manuscript, the Book of Kells; talking about the Old Library Long Room that appeared in the movie Star Wars; chattin’ with Cousin Henry; taking in Riverdance at the Gaiety Theatre; and trekking through the Wicklow Mountains national park in Glendalough, will be substantial.

This Irish kickoff to a month of excursions is yet another Michelle Obama special, where the G-8 Summit global affairs discussions double as a ‘Wait! Why not milk this baby for all it’s worth’ opportunity to get some vacay time out of the deal.

Think back to Obama’s March 2011 trip to Brazil.  That’s when all hell was breaking loose in Libya, and presidential business morphed into a family sightseeing tour of Rio De Janiero.  Remember when it was rumored that Mrs. Obama closed down a section of Madison Avenue in New York City to spend $50,000 at British lingerie shop Agent Provocateur? Well now, citing security considerations, inside sources are playing down the prospect that Mrs. Obama is going on a sightseeing-and-shopping spree in Dublin.

One thing’s for sure: Michelle certainly did ratchet up the lavishness level on this outing. A total of 30 rooms were booked for the first lady and her entourage in the five-star, 265-room Shelbourne Hotel. The Shelbourne Hotel has been all spiffed up and the “Guardians of the Peace of Ireland,” also known as gardai, are assisting the Secret Service detail and are gardai-ing the hotel.

Always mindful of the nation’s budgetary crisis, Michelle chose the highest of high-end accommodations for the ancestry/heritage part of the tour. In Ireland, Mrs. Obama will stay in the sumptuous €2,500-a-night Princess Grace Suite.  The Princess Grace Suite is where Grace Kelly lodged whenever she and Prince Rainier of Monaco vacationed in Ireland.

The suite is described as not only allowing “guests remarkable views of the city centre park, but surrounds them with opulent amenities befitting royalty.” The bill for the Hollywood-style digs translates into $3,927 American greenbacks per night.

A bit of trivia:  Alois Hitler, Adolf Hitler’s brother, worked in the Shelbourne Hotel in the 1900’s, and in 1922, the Irish Constitution was drafted in room 112, which is now known as the Constitution Room. Also of note is that prior to Michelle Obama arriving at the hotel, a frightened little girl who died in 1846 named Mary Masters had already frightened people by haunting the establishment.

Which brings us to Michelle’s on-stage comments at a special performance of Riverdance, which merrily took place in the Gaiety Theatre.

It was there that Mrs. Obama, accompanied by Taoiseach Enda Kenny‘s wife Fionnuala O’Kelly, addressed 1,000 schoolchildren bussed in from Barack O’Bama’s familial home.  President Michael D. Higgins’s wife Sabina was also there, but unlike America’s first lady, Sabina chose to remain silent. Better Ireland’s first lady say nothing than slip and mutter, within earshot of Michelle, “Imeacht gan teacht ort,” which means “May you leave without returning.”

Nonetheless, Michelle did tell the Gaiety audience “It’s good to be home,” which was more than a little bizarre.

Then, just like a few months back in Chicago when Michelle Obama said she was Hadiya Pendleton, the 15-year-old schoolgirl killed by gun violence, and Hadiya Pendleton was her, Mrs. Obama, who is still very much alive, reached down in a spirit of kinship toward the children of Ireland. Speaking to an audience staring up at Mrs. Obama in wide-eyed wonder, the first lady said, “We are you. We are just like you.”Yeah, right!  Sorry, but at $4K a night, the only similarity between the smitten Moneygall schoolchildren and shameless über-vacationer Michelle the Money Gal – is nothing at all.