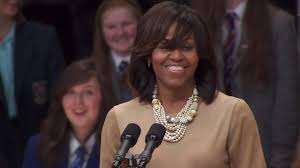 Every year, like clockwork, Mrs. Obama exploits the president’s official business responsibilities to squeeze in a pre-summer vacation, otherwise known as a PSV. A PSV is where vacation junkie Michelle finds a way to finagle a series of trips at the taxpayer’s expense.

Here is how it’s done:  The president announces his plan to attend the G8 summit at the Lough Erne resort in Northern Ireland.  Michelle convinces Barack to schedule some sort of secondary sideshow so the family can use it as an excuse to travel in the highest possible style, cost-free, compliments of the American taxpayer.

On this trip, the ancillary appearance will be in Belfast where President Obama will subject Irish students to a sizeable dose of his customary blarney. Michelle, as well as Sasha and Malia, will all grit their teeth and endure the Belfast students’ speech.

Let’s remember, this is the woman who couldn’t find the time to meet and spend diplomatic time with China’s first lady Peng Liyuan at the Sunnylands Summit in Rancho Mirage, California because she had to stay home for the weekend to help her daughters close out the school year at Sidwell Friends. When it comes to sharing the spotlight with a slender and attractive first lady from overseas, suddenly Michelle becomes a homebody.

Cleaning out backpacks and scraping all those stickers off the inside of school lockers must be why Michelle feels she’s earned herself yet another PSV.

From Belfast it’s off to Dublin for a tour of Ireland’s oldest university, Trinity College.  The first lady will then meet with Irish Embassy staff, and for the highlight of the return to Barry O’Bama’s ancestral homeland, will attend a special performance of Riverdance.  The latter will be held at a venue whose name aptly sums up the festive spirit of LGBT Pride Month recently celebrated at the White House: the Gaiety Theatre.

While at the Riverdance performance, it remains to be seen whether Michelle has plans to “Let’s Move” across the stage and join in the joyful Irish step dance.

At the Riverdance function, America’s boogying first lady will be joined by Fionnuala O’Kelly, the wife of the Taoiseach Enda Kenny, and Sabina Higgins, the wife of the Irish President Michael Higgins, who all clearly have more clout than Xi Jinping’s fetching bride Peng Liyuan when it comes to getting Michelle O’Bama to accept an invite.

Apparently, it’s vital that the president’s wife and kids take in the Riverdance performance because “They were invited to visit the last time that Barry O’Bama was in Ireland.” Mr. and Mrs. Obama couldn’t make it that time because Barack was busy banging back Guinness and behaving like an Irish Kunta Kinte in Moneygall tracing his Gaelic roots.

So therefore, according to White House deputy national security adviser Ben Rhodes, the only reason the White House is spending millions of dollars for Mom and the girls to fly to Ireland is so that the trio has another “opportunity …to accept …hospitality?”

Next stop on Michelle’s PSV is Deutschland, where Frau Obama and Fräuleins Sasha and Malia will join der Führer, er, I mean the President in Berlin.

Huge supporter of Israel that she is, the first lady will visit the Memorial to the Murdered Jews of Europe in Mauerpark. Chancellor Angela Merkel’s husband Joachim Sauer will be doing the honors and is scheduled to escort Michelle on a better-half tour of the (Berlin) Wall Park.

Frau Obama will then pay a visit to the Reichstag before joining President Obama for the official dinner hosted by the chancellor, where Mrs. Obama will likely be wearing haute couture pricy enough to solve the Euro Crisis.

Michelle and the girls will then climb aboard Air Force One, fly home, unpack, and then repack for the next leg of the PSV.  From June 26th until July 3rd the travelling Obamas will venture forth on a $60-100 million trip to sub-Saharan Africa that a White House Official is saying is “long overdue.”

In Africa the Obama entourage will spend a night in Dakar, Sénégal, two nights in Johannesburg, a night in Cape Town, and one night in Dar es Salaam, Tanzania.  A stop in Kenya to visit the extended Obama family is not on the itinerary, oddly enough, and neither is a visit to King George VI Hospital in Nairobi, nor Coast Province Hospital in Mombasa.

On a 2011 pre-summer vacation the first lady and the girls toured South Africa without the president. In Botswana, Michelle feasted on fried fat cakes.  If she chooses to indulge in similar fried fare this time around, even if she choses to sit out the Riverdance, she really should seize the opportunity to dance with the Masai tribe in Tanzania.  After all, up next is the “official” summer vacation in August at a 28-acre luxury estate in Martha’s Vineyard, and Michelle soon will need to fit into her swimsuit.