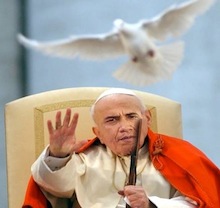 The Vatican says the late Pope John Paul II is slated to get sainthood!

The problem:  In the world of social justice, level playing fields, and equity, is this really fair to people who are never canonized?  After all, Barack Obama was able to level the playing field in the Nobel Prize business by getting the committee to grant him the 2009 Nobel Peace Prize for doing absolutely nothing, so why not canonization?

There’s no arguing that there is a large measure of discrimination afoot in a system that only makes saints out of people who are spiritually connected to God, wholly committed to loving others without expectation of anything in return, and disconnected from the passions and carnality of the fleshly world.

Therefore, the same way Obama is pressuring the Catholic Church to circumvent the Constitutional right to freedom of religion, on his short list of things to address he should also try to convince the new pope to change the prejudicial criteria for sainthood.

One good thing – John XXIII is being canonized without the required second miracle, which means Barack Obama has some leverage.  The president should strike while the iron is hot and exercise his outstanding negotiating skills by proposing an Obamacare tradeoff with Pope Francis.

If Pope Francis acquiesces and agrees to canonize Barack Obama premortem, and then assign him the name St. Barry of Social Justice, Obama will be the first living, breathing, and completely unsaintly non-Catholic saint ever to rise to the status of Catholic sainthood.

No – in return for sainthood, Obama can agree to give up the relentless effort to force the Catholic Church to cover birth control and abortion. Roman Catholics canonize Obama, and the Sandra Flukes of the world will have to get their contraceptives elsewhere.  Deal? Deal!

If it happens, then Barack Obama will officially be the first African American president canonized a saint while still in the process of tending to the rising oceans and the healing of the planet.  Not only that, but Barry and Michelle will have another addition to the ‘Do Nothing – Get Something’ family curio cabinet.

Or wait! Maybe the saintly couple can place the St. Barry of Social Justice statue next to his Nobel Peace Prize in the Oval Office where Winston Churchill’s bust used to be.