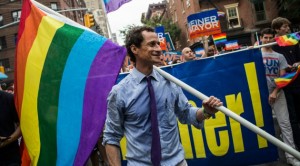 Originally posted in The Blacksphere

In the Big Apple, the two Democratic hopefuls in the mayoral race are a lesbian and a Weiner, and both showed up for the Gay Pride Parade on Fifth Avenue in NYC.

In attendance was Edie Windsor, the 83-year-old lesbian plaintiff in the Supreme Court case that took down the Defense of Marriage Act.  Edie rode in a convertible presumably representing geriatric lesbians, and was one of three Grand Marshalls of the event.

But the highlight of the parade was when Anthony Weiner showed up waving his rainbow flag, walking instead of riding in a Weiner-mobile.  When Anthony W. approached the end of the parade route, the crowd went absolutely wild for wiener.

Both his hands were occupied on this occasion, as Weiner carried a megaphone and a massive rainbow flag. As he marched toward the site of the Stonewall riots, the crowd reached out for the engaging Weiner, who excited the exuberant crowd in his usual wiener-ish way.

The mayoral hopeful made sure to brush past the spectators on Christopher Street, where thrilled admirers chanted: “Weiner, Weiner!”

After Weiner passed by with a Weiner sign that stretched the length of the street, one excited LGBT reveler said, “We love Weiner and you can quote me on that!”

Not only that, but Weiner swung his impressively-sized flag back and forth through the falling raindrops, adding still more color to the already colorful festivities.

Then, making the most of every opportunity for some innocuous innuendo, Weiner asked the gay paraders, “You guys know that’s my name right? We’re not just saying that.”

Professional politician, full time tweeter, and anatomical photographer/flirt, Anthony Weiner is hoping to win the Democratic nomination from City Council Speaker and appropriately masculine-looking Christine Quinn. Christine is a woman with aspirations to be NYC’s first female and first openly gay mayor if she wins the election this fall.

While there’s no arguing that Mr. Weiner’s flag was huge, Christine Quinn’s following was also huge.  However, Mr. Weiner and his group of devoted followers were reported to be “more lively” than Ms. Quinn’s.

So there you have it – the New York City 2013 Gay Pride Parade featured two candidates vying for the Democratic nomination, both of whom are anxious to be called Hizzoner.

One candidate is a less-than-lively lesbian with a huge following of supporters.

The other candidate is a Weiner toting a huge rainbow flag he proudly swung back and forth in the rain, using a megaphone to remind LGBT parade-goers, even the Christine Quinn-supporting anti-wiener types, to Vote for Weiner!