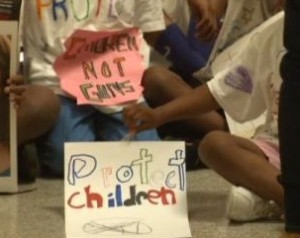 It was the South Side of Chicago — city of meat slicing machine mishaps, 9½-fingered mayors like Rahm Emanuel and childhood home to Michelle “Hadiya Pendleton was me and I was her” Obama.

The Chicago children were given a lesson plan that is sure to add even more drama to Barack Obama’s ongoing effort to wrest legal firearms out of the hands of law-abiding American citizens.

In a city where gun laws are strict and gun-related deaths are at unprecedented levels, dead cousins and aunts were mourned and heartbreaking tales of woe told.

The program coordinator, Minister Jasmine Taylor, maintained that dragging out vulnerable children whose lives were touched by gun violence to assist liberal politicians in furthering progressive policies, in the end, helps children heal.

“I think they’re able to connect better when they’re in a group of their peers, learning and talking about the things they’ve had go on in their families and their experiences.”

And if at some point these stories can be woven into an anti-Second Amendment speech delivered by a quivering-lipped Barack or Michelle Obama, all the better.

The day of social action was chock full of anti-gun-related activities.  The children were read poetry, and then were given a drum demonstration, which was an odd choice.  Wouldn’t a piccolo concert have been better than subjecting already-spooked children to a rat-a-tat-tat that sounds a lot like the pop of a gun?

Then, although purely as a cathartic experience, in the style of the children who wrote to the president about gun violence and then attended the signing of 23 executive actions establishing stricter gun control, these children also gave Obama additional fodder for… er, I mean, explained to the Protector of [only] Wanted Children their desire to live.

As an aside, it’s too bad unborn babies can’t write similar letters to Obama expressing their desire to live.

Nonetheless, looking to President Obama to ensure that they do get to live, the children expressed future hopes and dreams, if, and only if, Barack Obama does allow them to live.

Some of those dreams include becoming a doctor (shackled like a slave to the Obamacare system), a police officer (castrated by the DOJ), the President (if, that is, by the time they grow up Obama has lifted Martial Law and finally left office), a princess (like Michelle Obama), and a man of God (like Liberation Theologist/anti-Semite/America-hating racist, the ex-reverend Jeremiah Wright).

So America now has something to look forward to.

In the future, sure to be woven into the next anti-gun speech, will be excerpts from letters written by Chicago children to the President of the United States demanding that elected officials “protect children” (who could have been, but miraculously were not aborted), “not guns,” nor the Second Amendment.