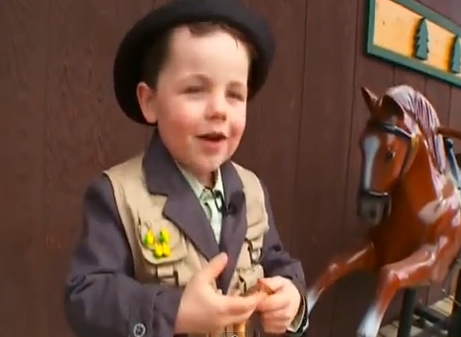 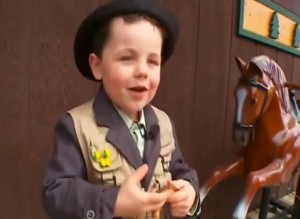 Ever since Barack Obama became president, the trend to elect unprepared, inexperienced leaders has been catching on.  Case in point: the mayor of Dorset, Minnesota is four-year-old Robert “Bobby” Tufts.  Amazingly, Bobby was three years old when he first ran for mayor and won the election.

After all, Barack Obama is currently administrating America.  That’s why fedora-wearing Bobby, who is intellectually, politically, and experientially on par with the preschooler occupying the White House, is more than qualified to assume the mayoralty of a small town in Minnesota.

For the record, Dorset is home to only 22-28 residents, but populace, or lack thereof, is not the point.  The point is that Barack Obama has set the tone, and since his emergence on the political scene, toddler-types with political aspirations can now have confidence that if they run for political office, they too can win. That’s what happened with Bobby Tufts: he emulated Barack Obama, ran for an office he was unqualified for, and won!

Now that both guys are on the job we can see that Bobby and Barry have similar attributes: Bobby likes ice cream and fishing, Barry enjoys shave ice and pick-pocketing American taxpayers.

After one year in office, like Barry, Bobby is now planning to run for a second term. In Dorset, voting takes place at the Taste of Dorset Festival.  Here’s how it works:  mimicking the voting practices currently taking place around America, money and multiple votes are key.

Remember when Barack Obama, armed with lots of money, paid ACORN workers to ensure Obama supporters voted multiple times, even if they were dead?  Well, in Dorset, names are thrown into a hat, and for $1 a ballot, people can vote as many times as they want.

Much like Obama, who pulled the strings during the last two elections, as mayor, Bobby will be the one pulling the name out of the hat at this year’s Taste of Dorset Festival and hopes the name he pulls will be his own.

Despite his inexperience, youth and spoof-like stint in office, whenever he’s spotted walking around town eating ice cream, residents greet Bobby with shouts of “Mr. Mayor.”

Like Barry, Bobby is his own best advocate and is constantly about the business of campaigning.   One side of the promotional card he hands out shows Bobby, who loves fishing as much as Obama loves golfing, decked out with a tan fishing vest over a suit jacket. The other side of the card shows Bobby sitting in a porch swing with his girlfriend, Sophie, who looks nothing like Michelle Obama.

The card reads, “I would love to be your Mayor as much as I love Sophie”; that sentiment is reminiscent of Obama, who loves being president almost as much as he loves himself.

Bobby, like Obama, doesn’t do much except greet visitors who come to Dorset, a northern Minnesota lake town known for resorts, tourism, and restaurants. So, in other words, for those on vacation, Bobby, like President Barry, who also is well-schooled in vacationing, meets and greets people; and other than that does little else.

Oh, wait! Even after the election, Barry is still continually fundraising. In like manner, Bobby enjoys raising money for Ronald McDonald House Charities of the Red River Valley in Fargo, N.D.

In the position for a year now, Emma Tufts, Bobby’s mom, sounding a lot like a besotted Obama supporter in denial, shared that she believes “he’s doing a fine job.”

What’s the opinion of other supporters? Well, because the description could apply to either politician, it’s unclear whether Hubbard County Sheriff Cory Aukes was referring to Bobby Tufts or Barack Obama when he said the following: “I think he’s a cute little bugger and I think a lot of people share the same, you know, opinion as me, and it’s neat. You know, how often do you see a little kid like that who’s – call `em camera-friendly or whatever, you know – he’s got a very good little personality, and he’s not afraid to show it. So I think it’s great.”

If it’s Bobby the sheriff is talking about, then kudos to Barack Obama, who’s accomplished little besides opening the door for other “cute little buggers” with similar abilities and interests to embark on a future in politics.

Which means that, thanks to America’s seriously stunted president, there is now a way for other “camera friendly or whatever” preschoolers like himself to rise to the level of world leader after having their name pulled out of a hat.