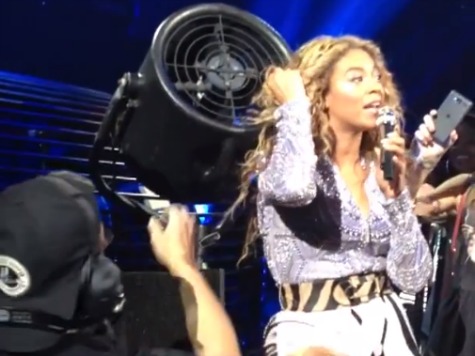 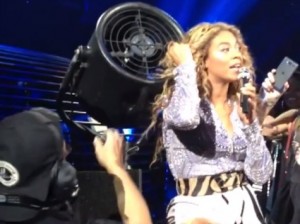 The sizzling temperatures are not the only things turning the heat up all over America. Yet as racial unrest, IRS controversies and other scandals continue to rage, it seems nothing can prevent Michelle Obama from squeezing every last ounce of summer vacation fun out of June, July and August.

In Ireland it was a $4,000 per-night stay in the Princess Grace Suite at the Shelbourne Hotel in Dublin, an African adventure in the beginning of July, and now, mid-month, the First Lady and the girls accompanied by 20 “friends” gassed up the People’s Plane and flew to Chicago to take in yet another Beyoncé concert.

And all that is just an appetizer for the “extended vacation” plans the Obama women have for Martha’s Vineyard in August.

Nevertheless, while Rihanna, whose boyfriend Chris Brown has been known to rough her up, was storming off the stage after being pelted with potato chips in the UK, Mrs. Jay-Z Carter was performing for American royalty in the Obama hometown of Chicago.

In preparation for the event, extra security swept Chicago’s United Center, and on the night of the concert the 20-person Obama entourage fueled up in a private room at Carmichael’s Chicago Steak House prior to dancing it up with Queen Bey.

Curiously, Beyoncé, who is the spokesperson for Pepsi, wrote a song for and performed in a ‘Let’s Move!’ video entitled “Move Your Body.” Clearly disregarding Beyoncé’s “$50 million, multi-faceted deal with Pepsi,” and despite Beyoncé guzzling soda in commercials, Mrs. Obama, who incessantly harangues America about sugar content, must agree with her husband who said that “Beyoncé could not be a better role model for my girls.” Speaking of great role models, wonder what Michelle thought about the glittery nipple ensemble Beyoncé dons during her “Mrs. Carter Show World Tour.”

But before America gets apoplectic about Mrs. Obama spending more tax money jetting around the country and the world having a blast, it’s best to be fair. Apparently, the concert wasn’t the real reason Michelle O and Co. went to Chicago, nor was it so that Mrs. Obama could spend a little girl time chatting with Oprah’s best friend Gayle King while Mrs. Carter sang “Naughty Girl,” nor was it to potentially be in attendance for another Beyoncé-led moment of silence for Trayvon Martin.

Oh no, none of those reasons apply. Mrs. Obama was mainly in Chicago to attend an official event with Mayor Rahm Emanuel (who was recently caught boogying to “Blurred Lines” at a Robin Thicke “Taste of Chicago” event), to help Chicago high school students get summer jobs–in mid-July–while she looks forward to a relaxing time on Martha’s Vineyard in August.