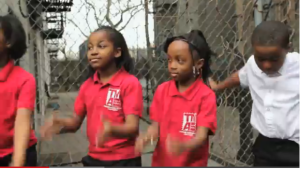 Michelle Obama is hip-hopping her way into our personal business again.

This time the best friend of hip-hop magnate, Jay-Z, is coincidentally teaming up with those who think it’s a brilliant idea to integrate hip-hop into the fight against obesity.

In an effort to fight flab, the First Lady will be promoting a new healthy hip-hop album and video.  Mrs. Obama makes an appearance in the first video, which features an odd mix of Doug E. Fresh, singer-songwriter Jordin Sparks, and TV medical personality Dr. Oz, scrubs and all.

The “work hard/eat right” and “tell somebody/it’s your body/c’mon” song is the first cut of a 19-track album due to be released by the Partnership for a Healthier America, the nonprofit group that’s working in conjunction with Michelle Obama’s Let’s Move! anti-obesity campaign and a New York-based group called Hip Hop Public Health.

This new venture smacks of Beyoncé promoting Beyoncé while dancing in an off-the-shoulder blouse and high-heeled sneakers in a cafeteria with kids that include a chubby white boy in a sideways baseball cap popping in time to “Move Your Body.”

In the current endeavor, Jordin, Doug E., Mehmet, and Michelle are joined by hip-hopping kids in red t-shirts hippity-hopping all over the place.  The hope is that popping and bouncing will send the message that together with Michelle Obama’s austere lunchroom choices, moving in time to music can transform a slacker kid into a vibrantly healthy specimen of Let’s Move! gloriousness.

Until that happens, on September 30th a full album will be released that includes hip-hop cuts with titles like “Veggie Luv,” by lesbian R&B artist Monifah Carter and “Sex Appeal” artist J Rome, “Hip Hop LEAN,” by Artie Green, and “Give Myself a Try,” by Anthony Weiner, oops, I mean Ryan Beatty.

The goal is to make 10 of the 19 songs on the album into music videos. Those videos will be distributed to schools across the nation beginning with 40 educational institutions located in New York City.  In the near future, San Antonio, Philadelphia, and Washington DC schools will also receive videos.

The hope is, that in addition to controlling what children eat for lunch, Michelle Obama can also strongly recommend, by way of hip-hop videos, what teachers and students should and should not do during recess and gym class.

Former Chicago-based Obama family personal chef/current Let’s Move! Executive Director/White House assistant chef Sam Kass is in hearty agreement.  Sam believes that hip-hop artists are “cultural leaders and visionaries,” and said that “Cultural leaders and visionaries in our country can give these messages to kids in a way that’s not preachy.” Ya’ mean “preachy” as in Michelle Obama “preachy?”

Just like liberals believe that all children are having sex and doing drugs, Kass is convinced that, like it or not, “Kids are going to be dancing and listening to the music, I think hip-hop in particular – so many kids love hip-hop.”

Unfortunately, Sam Kass is right; hip-hop, with all its imperfections, is a “core part of our culture. And particularly in the African-American community and the Latino community which is being disproportionately affected by those health issues.”

According to a 2008 study published in the Journal of the American Board of Family Medicine:

That must be why most of the kids in the video hip-hopping around in red t-shirts appear to be either African American or Latino, with a token fat white kid thrown in for good measure.

All this “Veggie Luv” hip-hop hope is very impressive. However, the problem is that while Jordin, Dr. Oz, and Mrs. O are relatively benign influences, most hip- hop is not benign.

Pitbull, Eminem, Lil’ Wayne, New Boyz, and Lil’ John & The Eastside Boys, among others, have zero problem raking in the money for exposing young children to vile, raunchy lyrics.

In other words, in the long run, using hip-hop to encourage children to get healthy could end up introducing impressionable kids to a music genre that may shave off a few pounds here or there, but could ultimately be detrimental to young psyches and negatively impact lifestyle choices and character.

So once again, by installing herself as an authority on things she knows nothing about, Michelle Obama, in an effort to ban sugar, defeats the purpose by sprinkling sugar on broccoli to make it more palatable.

There is an upside, however.

After formerly chubby kids have their appetites whetted for hip-hop by Michelle Obama and lose some poundage, they can learn sex tips from hip-hop artists like Drake and J. Cole. Then, Mrs. Obama, Planned Parenthood President Cecile Richards, doyenne of contraception rights Sandra Fluke, and Texas’ very own Wendy ‘kill ‘em after 20-weeks’ Davis can star in yet another uplifting video with little kids in red t-shirts dancing in time to rapping twins Kane and Abel’s hip-hop tune “Abortion.”