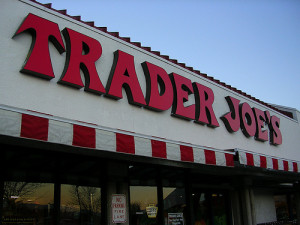 Although Trader Joe’s is a tad hippy-dippy, I like shopping there because they have fair prices and unique specialty items.

Where I live, Trader Joe’s clientele seem overly concerned with making sure they have cloth bags, and by and large, other than those sporting nose rings and those blanketed in tattoos, many of the shoppers remind me of 1970’s hippies in need of a good cut-and-color.

One other reason I enjoy shopping at TJ’s is for research purposes. I make it a habit to seek out and strike up conversations with opinionated 20-somethings who like to engage in small talk while ringing up groceries.

If truth be told, I’m so adept at wading into political waters that I’ve been known to turn a conversation about a jar of Trader Joe’s Corn and Chile Tomato-Less Salsa into a Barack Obama question-and-answer session. That’s why, thanks to Trader Joe’s, over the years I’ve had many a conversation with otherwise unemployed college-grad Obama fans who’ve spoken openly about the positive qualities of Marxism, socialized healthcare, and windmill-powered energy.

What’s odd is that, despite shilling for Obamacare and decrying the injustices of greedy corporate America, a couple of Trader Giotto workers I’ve chatted with shared that they work packing groceries for a private company for 20 hours a week because they are well compensated, get two weeks’ paid vacation, a 401K plan, and until recently, low-cost health insurance.

In fact, one time, while bagging my Organic Brown Rice Fusilli, a talkative cashier shared with me that after losing her job on Wall Street she came to work for Trader Joe’s and has never been happier.

That’s why you can imagine my shock when, after telling every unemployed person I know to “Go to work at Trader Joe’s,” I found out that thanks to the heavy burden of Obamacare, the specialty grocery store has now been forced to no longer offer healthcare coverage to its part-time employees.

That’s right, by way of a confidential letter from Trader Joe’s CEO Dan Bane, employees who work less than 30 hours per week found out that starting on the first of the year they’ll need to avail themselves of those Affordable Care Act exchanges spoken so highly of by the guy scanning my Sea Salt & Turbinado Sugar Dark Chocolate Almonds way back before the presidential election.

One anonymous employee, soon to be consigned to a healthcare exchange, described the medical coverage that was provided by Trader Joe’s as “one of the best parts about the job.”

Prior to being relegated to an ACA exchange along with millions of illegals and hordes of under and unemployed Americans, this particular woman paid $35 per paycheck, or $70 per month, for a plan that covered 80 percent of her medical costs, with a $500 deductible and vision and prescription drug coverage.

Now that same woman is freaking out, lamenting, “There are several folks I work with who are there for the insurance as much as anything, mostly folks with young families.”  The shell-shocked employee confessed, “I can say that when I opened and read the letter… my reaction was pure panic, followed quickly by anger.”

Scrambling to figure out what she’ll do come January 1st when TJ’s gives part-time workers a $500 check and points the reluctant toward a healthcare exchange, the terrified worker had this to say:

I still have so much anxiety over this, worrying will I have coverage, will it be equivalent, and how do I factor this into my budget?”  She continued: “I’m a full-time student living alone. Everything in my budget is extremely tight. This is something that’s throwing a wrench into everything.

In 2012, Barack Obama received 55% of the female vote, 60% of the 18-29 year old vote, and 63% of the under-30 vote, which indicates that this particular female, a college-age student working part time, probably did cast her vote for the president.  Depending on the state, the female “I have a crush on Obama” vote reached 68%.

So, if this particular young Trader Joe’s worker did vote for Obama, what exactly did she think she was voting for – free contraceptives that she’s now too anxiety-ridden to use?

Here’s a suggestion: Maybe to preserve part-time healthcare benefits, Trader Joe’s could save money by discontinuing the handing out of free Colombia Supremo samples at the demo booth.

But because that’s not likely to happen, Trader Joe’s employees working less than 30 hours per week will soon find themselves part of the healthcare system that those I conversed with spoke of so highly of just last year. That’s why after the fact, it will be interesting to engage in conversation with one particular male 20-hour-a-week cashier who frequently touted Barack Obama as the key to equity and fairness in an inequitable, unfair world.

As that Generation Y guy with half his head shaved, earlobe expanders, and the oriental tattoo on his neck double bags my next batch of Trader Joe’s Chocolatey Cats Cookies (for People), I’ll be sure to ask him how it feels to be forced to join the ranks of those he swore would be ecstatic about Obamacare.