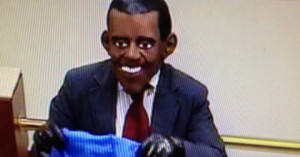 Originally posted on The Blacksphere

John put on a Barack Obama mask, a suit coat, a tie and jeans (not Mom jeans), and headed over to Daniel Webster Highway to rob a Bank of America, which in itself was a patriotic choice of banks to rob.

Mr. Griffin was in possession of a loaded gun when arrested. After being charged with robbery, John was put in jail and is presently being being held on a $75K bond. Obviously, John doesn’t have the $75K, not only because if he had the money he wouldn’t be robbing a bank, but also because the guy he dressed up like has his and everyone else’s money.

Wait! Why would Mr. Griffin be arrested?  He was just doing what President Obama does, which is to pilfer from the American people. Barack Obama set the example; if a person is in need of some cash, and it happens to belong to someone else, don’t hesitate, go take it!

Not only that, but the Bank of America should have been more open to the president’s suggestion and ‘shared the wealth’ with Mr. Griffin.

As for the mask, maybe John felt if he could trick the tellers into believing he was really Barack Obama they would have gladly handed over the money without an argument.

As for the gun, Griffin probably figured if Eric Holder and Barack Obama are cool with drug cartels in Mexico waving American-provided weaponry around, why would it be a problem if a guy from New Hampshire had a gun in his hand when emulating President Obama stealing people’s money?

Barack Obama, demonizes evil banks, robs the American people of every cent they have, and gives guns to drug cartels. Then, an American citizen imitates the president and robs an evil bank with a gun that’s a whole lot less intimidating than an AK-47 – and he’s arrested?

This has got to be some kind of terrible misunderstanding!