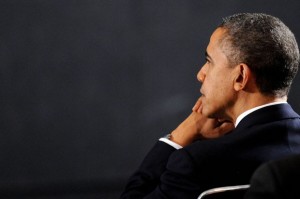 President Obama showed up at a press briefing Thursday to address the Philippines typhoon as well as an American typhoon called Obamacare. Former FOX News reporter Major Garrett, now with CBS News, was there and presented the president with some tough questions.

Addressing the infamous ‘like your plan…keep your plan’ claim, Major posed this question to Obama:

Do you not believe… people deserve a deeper, more transparent accountability from you as to why you said that over and over when your own statistics published in the Federal Register alerted your policy staff – and, I presume, you – to the fact that millions of Americans would in fact probably fall into the very gap you’re trying to administratively fix now?

Mr. Garrett followed that inquiry with a second one:

You were informed or several people in this building were informed two weeks before the launch of the website that it was failing the most basic tests internally; and yet a decision was made to launch the website on October 1st. Did you, sir, make that test (sic)? And if so, did you regret that?

The president’s answer to the latter question — “I was not informed directly that the website would not be working as — the way it was supposed to” — was quite possibly one of the most disturbing revelations he’s ever made.

Regardless of what nightmare scenario the future may hold, for years America has swallowed a lot of bull from Barack Obama, who once said, “This was the moment when the rise of the oceans began to slow, and our planet began to heal.”  Someone supposedly endowed with that kind of omnipotence expects America to believe he was unaware that a measly website wasn’t working?

In a 2010 interview, retired hedge fund manager Julian Robertson made a very astute observation when he said, “on every occasion…Obama thinks…that he is the smartest person in the room.” The operative word there is “thinks.”

Then, after pointing out that “you can’t run the biggest business in the world having never run even a country store,” the billionaire went on to say, “[h]e’s just doing an awful job and people see it.”

Robertson, referring to that awful job, remarked that “[Obama]’s enough of a politician to see it — although he’s so cocky maybe he doesn’t see it.”  Now, three years later, cocksure Obama insists he didn’t see the website’s problems.

Responding to Major Garrett Obama said, “Has [sic] I been informed, I wouldn’t be going out saying, boy, this is going to be great.”

Although that answer sounds logical, it’s not necessarily true. Based on his ability to read a Teleprompter, Obama decided he had the credentials to run for president.  He was then elected because he was able to eloquently convince the naïve public that “this is going to be great.” As it turns out, things aren’t so great.

Nevertheless, the perpetual victim/self-perceived “smartest person in the room” continued to elaborate:

You know, I’m accused of a lot of things, but I don’t think I’m stupid enough to go around saying, this is going to be like shopping on Amazon or Travelocity, a week before the website opens, if I thought that it wasn’t going to work.

But didn’t Obama go around saying it would be easy to create shovel ready jobs, ban lobbyists, establish a transparent administration, create or save one million jobs, get tough with Iran, secure the borders, and halve the national debt?

The man who boasted of his power to “fundamentally transform” America then said, “So, clearly, we and I did not have enough awareness about the problems in the website.”

Maybe this time around his aides felt he was too pressed for time to keep up with the rollout of the health insurance marketplace because he was busy writing his Iranian pen pal, playing his 150th round of golf, Bollywood dancing with Michelle in the State Room, suggesting name changes for the Redskins, and listening in on Angela Merkel’s phone calls.

So in this case, America is expected to believe that the White House aides-de-camp chose to err on the side of less information concerning a legislative initiative that seeks to control 1/6th of the US economy.

Nevertheless, Obama went on to say, “Even a week into it, the thinking was that these were some glitches that would be fixed with patches, as opposed to some broader systemic problems that took much longer to fix and we’re still working on them.”

Evidently, Mr. Obama expects a grace period.  And why not? Didn’t longsuffering Americans, despite “broader systemic problems,” give the president four more years to rectify the mess he made during his first term?

Finishing up, President Obama said this, “I think it’s fair to say… we would not have rolled out something knowing very well that it wasn’t going to work the way it was supposed to, given all the scrutiny that we knew was going to be o[n]…” this absolutely dreadful excuse for a presidency.