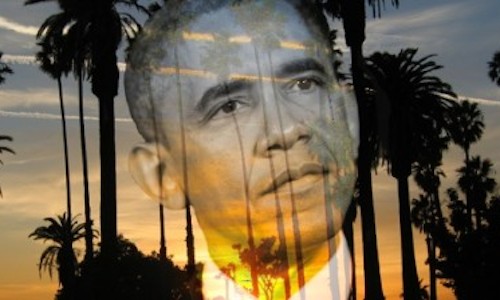 While Americans were busy scraping together pennies to try to pay for health insurance plans Barack Obama has demanded they buy, but can’t afford, Obama was in California fundraising at the mansion of the 144th richest person in America.

Hopping aboard Air Force One to burn up jet fuel costing an astounding $181K per hour, Obama put his priorities in order and jetted out to the sprawling Beverly Hills Estate of Egyptian-born Israeli-American television and media proprietor of Power Ranger fame, Haim Saban. Saban’s wife Cheryl was nominated by Obama to be the US representative at the upcoming U.N. General Assembly.

California’s very own Barbara Boxer was among the other politicians who attended the festivities.

The tony attendees included the Godfather of Black Music, Motown mogul, Clarence Avant, his wife Jacqueline, and their daughter Nicole, who serves as U.S. Ambassador to the Bahamas.  Netflix executive Ted Sarandos was Nicole’s guest.

SunAmerica’s Edythe and Eli Broad were there and neither one seemed to mind that the guest of honor had just thrown Israel under the bus.

Los Angeles mayor Eric Garcetti, Motown’s Berry Gordy, actors Tom Hanks and his wife Rita Wilson, and 90s sitcom star Paul Reiser showed up. Oprah mogul Michael King and his Healthy Child/Healthy World philanthropist wife Jenna, along with Warner Bros. Chairman Barry Meyer and his wife Wendy, chairwoman of the board of United Friends of the Children (who aren’t aborted), all slapped down $16K each to listen to Obama yammer for 14 minutes.

Gladly ‘sharing the wealth’ with each other, the Sabans held the dinner party under what was described as a “spectacular [heated] pitched tent…with shimmering light brown fabric…four palm tree-inspired chandeliers…bathed in orange/gold light…[decorated] with bouquets of pink roses,” complete with “an elaborate fountain…in the middle of the tent.”

Mr. Saban jokingly read Obama the riot act for not providing valet parking when he and his wife dined privately with the president and first lady for a “great food, great company, very inspiring…small intimate dinner” at the White House.

To ensure that White House guests don’t have to hoof it to the White House, Saban, generous soul that he is, declared, “We have valet parking at the Sabans! So, Mr. President if you would please, thank you. Taxpayers’ money? I’ll fund it, no problem.”

Saban criticized Fox News and called out Rush Limbaugh by name for haranguing the president over the “technical glitch on the Obamacare website.”

The gazillionaire blamed everyone but Obama for having “clouded some of the most remarkable achievements of [the Obama] administration.”

Immediately after complaining that taxpayers don’t fund valet parking, Mr. Saban then listed Obama’s accomplishments so that his guests could “see things with perspective without allowing the caffeine that’s in the tea party’s rhetoric to keep us up at night worrying.”

Thrilled guests listened as their host, who obviously hasn’t been keeping up with the news, mentioned Obama’s record on foreign policy, saying, “We’re out of Iraq, we’re out of Afghanistan” and “the president’s commitment to Israel’s security has never been stronger.”

The American-Israeli host did not mention that Obama, who had the clout to hobnob with California billionaires, chose not to negotiate for the release of three Americans, one of whom is a Christian pastor, all still imprisoned in Iran.

Barack Obama, who prides himself on speaking behalf of the middle class, shared for a snippet of time, making sure to touch upon the pressingly urgent valet parking controversy at the White House.

The star-studded evening started at a small-scale $2,500 to $15,000 per-ticket fundraiser for 160 people held at famous womanizer Earvin Magic Johnson’s and his wife Cookie’s pad.

The former Los Angeles Laker called Barack Obama “the greatest leader in the world,” which makes one wonder whether, besides having slept with 3,000 women, Magic Johnson also nibbled on 3,000 magic mushrooms.

After spending the night resting from the whirlwind of excitement, Barack Obama attended a $32,400-per-guest breakfast event (man alive, those better be some awesome waffles) at the home of Friends co-creator Marta Kauffman. After which the president has plans to visit and give a speech on the economy and the entertainment industry, both of which he knows nothing about, at mega donor Jeffrey Katzenberg‘s DreamWorks Animation HQ.

All along the fundraising route, despite his 37% approval rate, Obama was cheered as he talked about teamwork, Obamacare, immigration reform, the economy, and, of utmost importance, his commitment to providing gazillionaires with valet parking when arriving for intimate dinners at the White House.