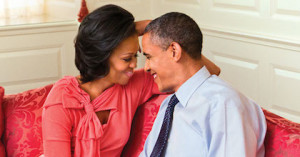 Appearing to be freshly nipped and tucked, 84-year-old Barbara Walters recently sat down for the fifth time with Mr. and Mrs. Obama for a folksy interview on 20/20.

After oohing and ahhing over Obama family dogs Bo and Sunny, Ms. Wawa found out that when hubby is away, Bo settles into the spot where Mr. Romance normally snoozes in the conjugal bed alongside Mama Michelle.

Plumbing the depths of convivial conversation, Barbara, bless her heart, apparently thought that the First Liar and his bodacious bride Michelle, neither of whom are particularly honest people, were actually going to respond to her questions in a forthright manner.

Barbara asked the president, “Do you think that the first lady might have made a better president than you?” Maybe someone should have told Ms. Walters that the week Obama’s approval rate plummeted to 37% might not have been the best time to broach the ‘who’d be the better president’ topic.

Either way, it didn’t matter, because right about then it became evident that the fibbing first couple planned to play along and bust Baba’s Wawa.

First the haughty Barack Obama, who obviously doesn’t think anyone, let alone Michelle, is better at anything than he is, said that “Yes!” he thought Michelle would have made a better president.

Cut to commercial break, and somebody get the camera crew to douse Obama’s flaming trousers with a fire extinguisher.

Totally void of  testicular fortitude, Obama should have told Barbara that Valerie Jarrett is already president and  shares the seat of power with no one.

Nixing the ‘I’d be a better president’ idea, Michelle pointed out that Barack is a better choice because of his “patience, focus, tenacity and calm,” all traits she humbly admitted she lacks.  Then, leaning in with adoring attentiveness, Barbara asked the First Nag, who incessantly nags the entire country, if she nags her husband. Michelle responded that she “stays out of his ear.”

Let me tell you that “staying out of his ear” is quite an impressive feat, especially because them-there’s some all-encompassing ears.

At one point during the interview, the president told Barbara, “I did promise [Michelle] an interesting life.”

To which Michelle replied, “That he did. And, you know, he keeps his promises.”

Moving right along, Barack Obama told Ms. Walters that he will never run for elective office again and that the family is planning on staying in Washington DC after 2016 because Malia will be in college and her sister Sasha a sophomore in high school.

Moreover, Obama officially not running again doesn’t necessarily mean he plans on leaving office, a suspicion he confirmed when he admitted that the family might not return to Chicago.  In other words, the U-Haul truck everyone is hoping is already gassed up will not be heading back toward Illinois, home of Chicago deep-dish pizza anytime soon.

And Sasha’s academic aspirations are the excuse the Obamas are using to loiter around Washington DC after 2016?

Yep! In down-home, non-Telepromptered talk, the president told Barbara Walters, “So we’ve gotta—you know we gotta make sure that she’s doin’ well… until she goes off to college.”

Dad stressed that “Sasha will have a big say in where we are.”  Sure she will!  When America tries to run Michelle and Barry out of Washington DC, he can blame Sasha as the reason he refused to get out of town.

Then Mr. Obama told Barbara Walters the real reason he’s agreeing to stay in Washington DC: “Cause she’s, you know, obviously they–and Michelle–have made a lot of sacrifices on behalf of my cockamamie ideas, the running for office and things.”

Talk about sacrifices!  Yeah, we know those “cockamamie ideas” are precisely what have subjugated 300 million people for close to six years under authoritarian rule.

And speaking of authoritarian rule, ironically the only other president who maintained a residence in Washington DC after office was progressive Woodrow Wilson.  Wilson, like Obama, was also a Marxist despot who worshiped the power of the state, so wouldn’t it be fitting for Barack Obama to pay homage to another famous dictator type and stay in Washington DC just like Woodrow Wilson?

Either way, if Obama keeps chipping away at the US Constitution, at the rate he’s going by 2016 term limits and free and fair elections could very well be a thing of the past.  With the Constitution out of the way, the Obamas may very well end up staying in Washington DC indefinitely, but not because of Sasha Obama or her educational needs.

If that happens, just think of the endless number of fascinating interviews Barbara Walters can conduct with President-for-Life Barack Obama.  If Cloward-Piven chaos-induced Martial Law is finally declared, picture the enchanting White House tours of the Healthcare for the Holidays decorations!

What could be better for a decrepit liberal broadcast journalist in the coming years than to take her walker to 1600 Autocratic Avenue to reminisce with Barack Obama about the 2013 interview where she was the first to know he wouldn’t be running again and would never return to Chicago.