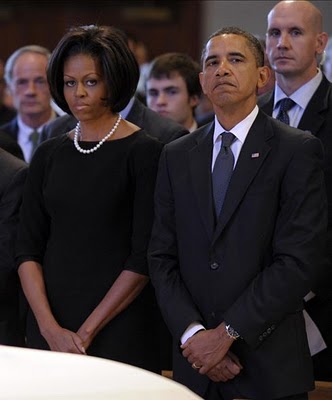 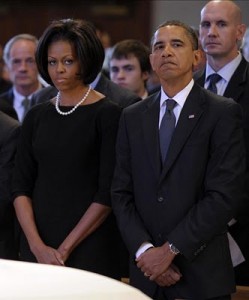 Michelle Obama is the scowling funeral attendee and Barack, whether he laughs or cries, just can’t please the woman.

For some reason the first lady either takes memorials so seriously that she glowers continuously throughout the service, or spending that much time sitting next to Barack Obama makes her perfectly-tweezed eyebrows furrow and her forehead elevens cry out for an emergency shot of Botox.

Unlike Bill Clinton, who cries only on camera at funerals, Mrs. Obama seems unaware that being on the world stage requires some acting skill. Even if the wife of a US president is bored, annoyed, or just plain pissed off at some blonde chick yukking it up with the old man, it’s best to learn how to pretend to be happy at public events.

If you think about it, the only time Michelle Obama beams is if she’s dancing with Ellen DeGeneres, front and center at a Beyoncé concert, making menu choices for chubby Americans, or if there is food involved.

The first funeral frown that was captured for posterity was at “Godmother” of the American civil rights movement Dorothy Height’s funeral. Her husband gave that eulogy, too. In essence, the gist of what Obama had to say about Dorothy was similar to what was conveyed at the 94,000-people strong funeral memorializing Nelson Mandela.

In Washington, DC, at 98-year-old Dorothy Height’s memorial, quite unlike himself, Obama had this to say about the deceased civil rights activist: “She never cared about who got the credit. What she cared about was the cause. The cause of justice, the cause of equality, the cause of opportunity, freedom’s cause.”

During that funeral, the president lost it. He cried so much it bordered on uncontrolled sobbing:

Michelle, doing her best Ice Princess, shot Mr. Obama a very displeased look that was thought to be a non-verbal communiqué to pull himself together. Let’s put it this way: judging from the expression on the first lady’s face, Barry’s histrionics were not going over well.

Now, three years later the first couple is in Johannesburg, South Africa, where the president eulogized the late Nelson Mandela with moving words such as:

Mandela understood the ties that bind the human spirit. There is a word in South Africa- Ubuntu – that describes his greatest gift: his recognition that we are all bound together in ways that can be invisible to the eye; that there is a oneness to humanity; that we achieve ourselves by sharing ourselves with others, and caring for those around us.

Only this time, rather than open lamentation, Barack Obama found a way to both mourn and have one helluva time as he horsed around taking playful selfies with British Prime Minister David Cameron and some blonde Danish PM Helle Thorning-Schmidt.

Again, Michelle displayed the same type of non-verbal displeasure as she did when Obama was crying back in Washington, DC over Dorothy Height, which certainly sends the president a mixed message.

If he expresses sorrow by crying, Mrs. Obama shoots him an annoyed look. If he’s affable, smiling, and having a good time with attractive blondes who just happen to be world leaders, she also shoots him a look.

In this particular case, it looks as if Barry was given a time out and forced to switch seats so that Michelle could put some distance between hubby and Ms. Thorning-Schmidt, who got more than the cold shoulder from Michelle. The Danish prime minister got the cold back.

Not for nothing, as they say in New York, but could you imagine how awkward the plane ride back home was for G.W. and Laura? The Bushes were probably subjected to hearing a furious Michelle, who apparently can’t control her face or her feelings, read Barry the riot act for getting a little too chummy with the blonde Danish chick.

Anyway, it makes one wonder: with the look on Mrs. Obama’s face at Dorothy Height’s funeral, what if Thalia had been sitting on the other side of macho salsa dancer Barack Obama?