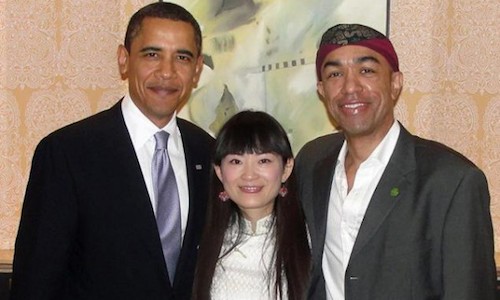 Remember during a 2012 campaign speech when criticizing those who wouldn’t buy into his left-wing policy plans to redistribute the wealth, Barack Obama attempted to quote Scripture by saying, “I am my brother’s keeper?”

Hoping to appeal to values voters, the president stressed, “Look, there’s no way of getting around that. Either folks like me are doing more, or somebody who can’t afford it is getting less.  And that’s not right.”

To drive home the point, the president adjusted his pretend clerical collar and then said, “I hear politicians talking about values in an election year,” and continued:

That time the president was exploiting the Bible to justify increasing teacher salaries, freezing interest rates on student loans, and investing in fetus-destroying stem cell research.  And even bogus climate change studies and plans to “double down” on supporting green companies.

What the Genesis story of Cain and Abel had to do with debunking what Obama called “you’re-on-your-own economics” is a mystery to anyone with even the most rudimentary understanding of Scripture.

In this particular case, it’s unlikely that the Vermonters, who live in the state where religion is least important, knew the proper context of the Scripture. So the very crowd Reverend Obama was propagandizing probably didn’t even recognize its improper usage.

Still, the thing about the president is that he cherry-picks and then misrepresents Scripture and uses it as weapon against his political adversaries.  Yet when it comes to practicing what he preaches, he’s always guilty of not doing what he demands of others.

Take for instance his dropping the ball in being a keeper of his own brothers. Barack Obama allows his half-brother George Hussein Obama to live in a slum-dog shanty lean-to in Nairobi. More recently, Barack the ‘Brother Keeper’ denied knowing his father’s brother, Uncle Omar Onyango Obama.

When a confused Omar publicly contradicted his nephew, the president walked back his comments. Obama then blamed his staff for falsifying his relationship with his uncle, and admitted he once lived with Omar in Cambridge while attending Harvard Law, the elite institution whose transcripts the president’s lawyers have sealed.

Now Obama’s half-brother, Mark Okoth Obama Ndesandjo, has shared his confusion with conservative radio talk show host, Laura Ingraham, as to why Barack told CNN in 2009 after the brothers met up in China that they had just met for the first time a few years earlier.  At the time, Obama said:

“I don’t know him well. I met him for the first time a couple of years ago.”

The brothers spent time in Kenya together and have gotten together on more than one occasion here in the states. During the interview, Mark told Laura Ingraham that at the time:

“I was floored by it — I don’t know why he said it. I think he was being president and was not being my brother.”

Why did Barack Obama, promoter of ‘brother keeping,’ deny having a relationship with his half-brother Mark, who is currently self-publishing an autobiography due out in February entitled Cultures: My Odyssey of Self-Discovery?

On a book promotional tour, when Mark was asked about his relationship with his brother Barack, he replied:

“Right now it’s cold and I think part of the reason is because of my writing. My writing has alienated some people in my family.”

Hopeful for reconciliation in the future, Mark said, “I hope that my brother and I can really hug each other after he’s president and we can be a family again.”

The president probably doesn’t realize it, but the Biblical story he referenced in Vermont while running for reelection is more fitting to how he treats his own flesh and blood than how the American people treat the needy.

When Obama used Scripture on that occasion to advance his own misguided agenda, he did it by misquoting Cain, one of the two sons of Adam and Eve.

Out of jealousy and rage, Cain murdered Abel.  When God, who already knew the answer to the question, asked, “Where [is] Abel thy brother?” much like Obama with his own family, Cain pretended he didn’t know where his brother was and responded, “I know not: [Am] I my brother’s keeper?”

Once again, Obama is condemned by words he thought he could misuse to condemn others.

Based on his denial that he knew his own brother Mark, the Scripture the president used to convict his political adversaries, instead convicts him of how he treats, or rather mistreats, his own family.

So for political expediency, Barack Obama demanded and continues to demand that Americans become the keepers of a phantom group of brothers he has concocted in his own mind. Meanwhile he ignores, rejects and hurts his literal flesh and blood.

If, in order to push his left-wing agenda, the president insists on Americans caring for imaginary brothers, then if asked again, “Where is thy brother,” the last thing that should be coming of Barack Obama’s lying mouth is “I know not.”