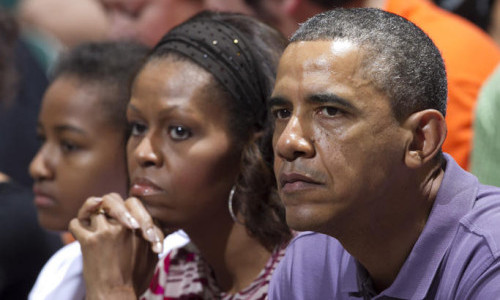 So, while America languishes in Obamacare terror, the Obama family packed up the basketballs, haute couture, the dogs and dog food, Grandma and the girls and climbed aboard Air Force One.

A 9 hour flight later the First Family et al landed at Oahu to enjoy the holidays. The stunning price tag? Somewhere in the neighborhood of $4 million dollars, give or take an $181K per hour on Air Force One or two.

One would think that with those kind of dinaros nothing but holly-jolly glee would be splashed across the faces of the Obama family.  However, based on one of the first vacation pictures to emerge, it appears to be quite the contrary.

Straight out of Honolulu, HI, USA, Barack Obama and  Michelle, along with their children Sasha and Malia, attended the NCAA basketball game between Oregon State and Akron at the Stan Sheriff Center on the campus of the University of Hawaii at Manoa.

Michelle Obama’s brother, Craig Robinson, is the head coach of Oregon State and coincidentally must have found himself in Hawaii at the same time as the first family.  As happenstance would have it, Craig will likely be joining the happy clan for Christmas…uh sorry…the holidays.

The problem is that judging from the photograph of the first family taking in the sports event featuring Uncle Craig’s team, things appear to be rather tense.

Based on that array of sullen mugs, the “trouble-free Hawaiian vacation” Mr. Obama was hoping for got off to a rocky start.

Now either the situation here at home where the historic president’s socialist utopian dream is crumbling before his very eyes has got Barry down and Michelle livid, or the lovebirds are at each other’s throats and cannot hide their hate for each other.

Come on people, a $4 million Oahu vacation for 17 days and that’s the best expression these two spoiled brats can muster up?

They aren’t even pretending to be happy. The President and first lady look more like pallbearers at funeral then spectators at basketball game. In fact, Barack looked much happier at Nelson Mandela’s funeral. Though, we should note, the Missus was sporting the same un-happy face.

The moral of this story: Other people’s money can’t buy  happiness, or obviously love. Socialists  attempting to rob the freedom of others oftentimes become prisoners in their own private hell.

And while Americans struggling to get by celebrate the true meaning of Christmas, two politically-correct control freaks who squander the American people’s money appear to be having a miserable time.