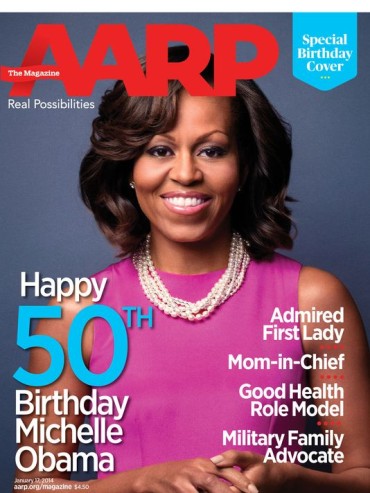 Barack Obama is gearing up to pummel America into submission with the issue of income inequality. Meanwhile, daughters Sasha and Malia Obama are being raised in an insulated, highbrow environment brimming with wealth, luxury, celebrity and exclusivity. After all, for Mom’s birthday, what lower- or middle-class American kid gets to hear Beyoncé sing “All the Single Ladies” in the East “Living” Room of their home?

Fresh off a month’s $4 million+ vacation, Mrs. Obama showed up at the gathering wearing a festive red jumpsuit whose designer price tag likely rivals a small down payment on a modest home somewhere in middle America.

Partaking of the “Snack and Sips” hors d’oeuvres and flowing champagne, in what People Magazine called a “glittery crowd of 500…chock-full of celebrities,” were the likes of pauper/charity case Joe Biden (net worth $500K), Attorney General Eric Holder (net worth $5.7 million), Bill and Ms. Hillary (combined net worth $100 million) and race hustler Rev. Al Sharpton (net worth $5 million).

When not hugging Smokey Robinson (net worth $100 million), Hillary Clinton spent her time charming Democratic Party donors. As for Bill Clinton, he chatted up singer/actress Jennifer Hudson (net worth $15 million).

To usher in new levels of hip-hop-cricy, DJ Cassidy was on hand, a hip-hop DJ to the stars who spins tunes for $100K a night. Stevie Wonder (net worth $110 million) joined DJ Cassidy onstage to serenade “My Cherie Amour” Michelle with a medley of her favorite songs.

Amazingly, those on the long list of African-American partygoers have somehow managed, along with the president and first lady, to prosper in America despite the constant barrage of racism aimed in their direction.

A dancing House Minority Speaker Nancy Pelosi (net worth $100 million) spent the evening in hot pursuit of Sir Paul McCartney (net worth $800 million), who was tearing up the dance floor with new wife Nancy Shevell. John Legend (net worth $15 million) ushered in the very special “piece of the pie” birthday cake, playing, in honor of the birthday girl, one traditional and one “jazzier” rendition of “Happy Birthday.”

Also caught up in the revelry were a handful of millionaires and billionaires from the evil world of corporate technology and business.

Forget Beyoncé singing “Drunk in Love”- for the group that attended this birthday get-together, “Drunk with Fame & Power” is more like it.

All in all, the net worth of those attending the birthday party of the wife of the man so anxious to address the plight of America’s income inequality, if tallied together, could have put a nice dent in the national debt.

Completing the sentimental nature of the whole affair and taking a break from addressing the all-encompassing and unfair dilemma of salary disparity in America, Barack Obama gave a touching toast to the woman he left in Hawaii for a couple of weeks to stew in her own resentment and bitterness.

No one knows for sure whether taxpayers picked up the tab on this shindig like they did for the flight home from Hawaii. Either way, it was reported that the first lady, a woman who frowns far more than she smiles, was “enthralled” and that “[y]ou could tell she had a lot of fun.”

So there you have it; that was Michelle Obama’s birthday party. And for all the preaching about fairness and equality the Obamas do, if given the choice Barack and Michelle will always choose to rub elbows with celebrities, well-heeled politicians, and corporate billionaires whose income status is unequal at best to 99.44% of the rest of America.